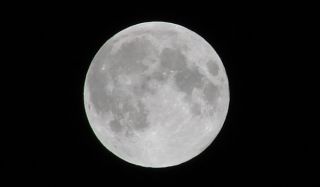 You might have heard it is magnified by the atmosphere just as it rises. Not so. Instead, it's your brain on Moon drugs.

The mind believes things on the horizon to be farther away than stuff overhead. Why? We're used to seeing clouds just a few miles above us, but the clouds on the horizon can be hundreds of miles away. So if we think it's farther away, and it's not, then it seems larger.

The effect (which also occurs with the setting Sun) is known as the Ponzo illusion. Try this at home whenever the Moon is full: When the Moon first comes up, hold something small in front of you and vary the distance until it appears the same size as the Moon, then repeat the experiment a few hours later.

The Moon generally appears full one or two nights before and after it's technical fullness. Oh, and technically, it's never really full.