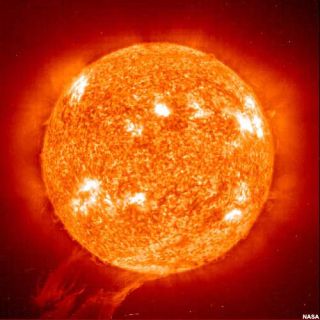 That giant flaming star in the sky does rotate, but moves at a much slower pace than the Earth.

It takes 24 hours for the Earth to make a full rotation, but since the sun isn't a solid object like a planet, its rotation is harder to pinpoint.

"Since the sun is a ball of gas/plasma, it does not have to rotate rigidly like the solid planets and moons do," according to NASA.

In fact, our gaseous sun is divided into different zones and layers, with each of our host star's regions moving at varying speeds. On average, the sun rotates on its axis once every 27 days. However, its equator spins the fastest and takes about 24 days to rotate, while the poles take more than 30 days. The inner parts of the sun also spin faster than the outer layers, according to NASA.

Back in 1612, Galileo Galilei noticed something odd: sunspots moved across the sun's disk over time, confirming the sun's rotation, according to Stanford University's Solar Center. Even today, researchers are able to monitor the sun's movements and rate of rotation by observing its sunspot activity.

Sunspots occur where the sun's plasma interacts with its magnetic field and can lead to solar flares and other types of solar storms.