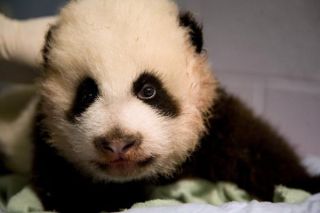 Tomorrow, this little guy will have a name.
(Image: © Zoo Atlanta.)

The cub's name was announced for the first time today (Feb. 15) during a ceremony at Zoo Atlanta. In a break from years past, the name was not chosen by a contest, but rather with the help of actor Jack Black of the film "Kung Fu Panda II," in hopes of drawing attention to plight of giant pandas. Po is the name of the panda in the movie and is voiced by Black.

"Today's announcement is the beginning of an amazing alliance between Zoo Atlanta and DreamWorks Animation. Our organizations share a commitment to giant panda conservation, particularly at the Chengdu Research Base of Giant Panda Breeding," said Raymond B. King, president and CEO of Zoo Atlanta. "We are proud and honored to share this moment with Jack Black, who has already helped to bring the importance of saving this species to a new generation of conservationists."

Following ancient Chinese tradition, panda cubs are not named until they have been alive for 100 days. Po, a boy , was born Nov. 3, 2010, and was the only giant panda born in the United States in 2010.

The 100-day tradition began in ancient China with human babies. Because the infants were so fragile, parents often waited 100 days to make sure they would survive before naming them. That tradition was carried over to giant panda cubs because their early survival was uncertain as well. They are tiny at birth and heavily dependent on the mothers, said Rebecca Snyder, the curator of mammals at Zoo Atlanta.

The names of those cubs were chosen by a contest. Mei Lan, roughly translated, means "Atlanta beauty" and Xi Lan means "Atlanta's joy."

The cub of honor wasn't present at the ceremony, but he did get to meet Black backstage. Po is still learning to walk behind the scenes. Cubs usually begin walking around 4 months of old, and so far Po is growing up right on schedule, Snyder said.

"He's been pretty much right on track," Snyder told OurAmazingPlanet.

One difference between Po and his siblings is that he is quieter. This could be something unique to him, or it could be because Lun Lun is now a more experienced mother and can address his needs more quickly, Snyder said.

"He's been super-easy because his mom is taking great care of him," Snyder said. "We've really been able to sit back and watch."

Panda cubs talk to their moms by either grunting or making high-pitched squeals, similar to human babies, Snyder said. They speak up when they need to eat, urinate or when they get cold.

Po will be a cub until he is weaned, which typically happens between 1.5 to 2.5 years of age. At this stage, he'll be called a sub-adult he'll no longer need mommy, but he won't be able to yet make babies of his own. That skill develops in females between 3 and 4 years old and in males between 4 and 6 years old.

Po has a lot of growing to do before he's ready to mate. First things first: learning to walk.

"He can't really get his rear legs under him right now, but he's normal," Snyder said. But when he finally does summon that strength, the zoo's newest star will really shine.

"His personality will become more noticeable once he begins walking and starts moving around," Snyder said.

Zoo officials hope he will be ready in the spring to walk out from behind the scenes and greet his fans.