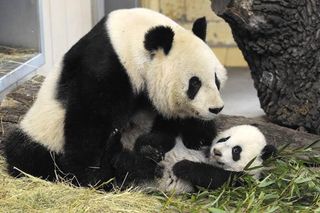 Fu Hu the panda baby, who was born on Aug. 23, 2010 is one of the stars of Austria's Schönbrunn Zoo in Vienna.

The zoo is the only one in Europe that has successfully naturally bred a Giant panda, an endangered species native to China.

The panda cub, named Fu Hu ("lucky Tiger" in Chinese), weighed just 100 grams at birth, but now tips the scales at 10 kilograms, showing just how much he has grown.

The 'maternity den' where Fu Hu was born, and where he spent the first months of his life has now become uninteresting and the little cub would rather spend his time in the indoor complex, climbing, cuddling up to his mother Yang Yang, or simply dozing on the branch of a tree.

The only panda cub to be born in the United States last year, at Zoo Atlanta, will be named on Tuesday (Feb. 15), its 100th day, in accordance with Chinese custom.