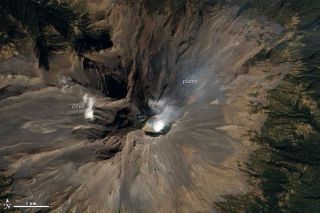 With a name that means smoking mountain in the Aztec language, Mexico's Popocatépetl does not disappoint.

The towering volcano, about 43 miles (70 kilometers) southeast of Mexico City, was emitting a faint plume of steam and gas on Jan. 4, 2011, when the Advanced Land Imager (ALI) on NASA's Earth Observing-1 (EO-1) satellite captured this photo-like image, according to a NASA statement.

The agency that monitors volcanoes in Mexico reported five low-intensity eruptions between Jan. 4 and 5.

Popocatépetl erupts frequently, and the current eruptive episode started on Jan. 9, 2005, according to the Global Volcanism Program.