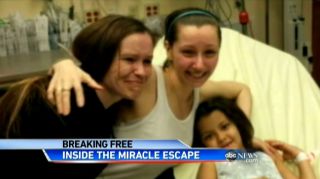 An ABC news segment shows a photograph of Amanda Berry (middle) with her sister and her daughter, Jocelyn, who was born during Berry's 10 years of captivity in a Cleveland home.
(Image: © ABC News video)

Three women kept captive in a boarded-up Cleveland house for between nine and 11 years will likely face a long road to recovery after their nightmarish ordeal.

The women, Amanda Berry, Gina DeJesus and Michelle Knight, all went missing between 2002 and 2004, when they were teens, or in Knight's case, 20 years old. The women managed to escape on Monday (May 6). Police told reporters this week that they had found chains and ropes in the house, and that the women were very rarely allowed outside into the backyard. Berry's 6-year-old daughter also escaped from the house.

Former school bus driver Ariel Castro has been charged with kidnapping and rape in the case.

The women's families told CNN that they were in good spirits upon being reunited with their families, but social scientists warn that the trauma of captivity is not likely to fade overnight — especially as they will have to recover in the public eye, under media pressure. [Understanding the 10 Most Destructive Human Behaviors]

"The big challenge that they face is the anticipation that everything is going to be perfect once family members are back together again," said Geoffrey Greif, a professor of social work at the University of Maryland who has studied missing and exploited children.

In fact, Greif said, the women's families have changed in the decades they have been gone. Berry's mother, Louwana Miller, died in 2006 without ever finding out what had happened to her daughter.

"The family grows, changes in one direction," Greif told LiveScience. "The women change in a different direction, and the issue is to accept the fact that their life trajectories have been very different."

At the same time, the abducted women are likely to suffer with the aftereffects of trauma, said pediatric and adolescent psychologist Carolyn Landis of University Hospitals Rainbow Babies & Children's Hospital in Cleveland. This could include post-traumatic stress disorder, or PTSD.

"I think of it as somebody who has been through a war," Landis told LiveScience. Symptoms of PTSD could include re-experiencing the trauma, anxiety, nightmares, insomnia and even physical ailments.

Coping in the aftermath

Abduction victims often feel guilt and shame, questioning themselves about whether they did enough to escape, Greif said. They might also compare themselves with individuals from other high-profile cases.

"From talking to other people who have been kidnapped and recovered, they sometimes measure themselves against the perception of how high-profile former abducted people do," Greif said. "It can set a bar that may have worked for Elizabeth Smart and Jaycee Dugard, but may not work for someone else."

Elizabeth Smart was kidnapped at age 14 from her bedroom in Salt Lake City, Utah, and held for nine months. Jaycee Lee Dugard was abducted at age 11 in South Lake Tahoe, Calif., and was kept in captivity for 18 years.

The women's sudden celebrity may also complicate their recovery, Landis said. Dugard's memoir, "A Stolen Life" (Simon & Schuster, 2011) discusses not being able to go out with her daughters in public, lest they be recognized.

"I hope that people will give them their space and their privacy so they can live normal lives, because if not it's almost like they're still in a prison," Landis said.