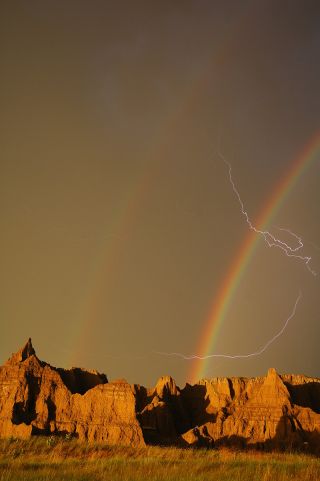 As rare a sight as you'll ever see flashed through the skies above Badlands National Park in South Dakota last week: Lightning struck through a double rainbow.

The double rainbow appeared in the sky near the end of a thunderstorm. But the storm wasn't quite done — a bolt of lightning ripped though the two rainbows, high above the red rocks below.

Rainbows form when sunlight passes through drops of water, and some of the light is bent, or refracted, more than other portions. A rainbow's colors go from red on the outside, which is bent least, through orange, yellow, green, and blue all the way to violet, which is bent the most.

Visitors from around the world come to Badlands, not for double rainbows, but to see the rugged beauty on the ground. This landscape of buttes, pinnacles and spires contains one of the world's richest fossil beds. Ancient mammals such as the saber-toothed cat once called the 244,000 acres of the Badlands home.