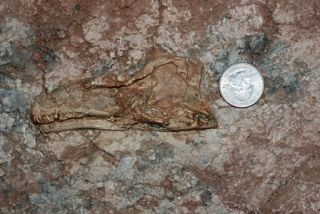 Scientists have discovered the fossilized skeleton of a baby dinosaur representing a new species of coelurosaur, a group of theropods that includes ancient beasts like T. rex.

With a skull that's barely taller than the diameter of a quarter, the remains are thought to have belonged to a dinosaur that was less than a year old when it died, and researchers think it measured just 3 feet (1 meter) long and weighed only 3 lbs. (1.3 kilogram).

But the baby may have grown into a bruiser in adulthood, possibly comparable to the 16-foot-long (5 meters) Monolophosaurus, a theropod dinosaur with a long bony crest on its head, or the 25-foot-long (7.6 m) Sinraptor, which means "Chinese plunderer." What's more, it was likely a meat-eater that stalked lizards and relatives of today's mammals and crocodilians, researchers say. [Image Gallery: Dinosaur Daycare]

Named Aorun zhaoi after a character in the Chinese epic tale "Journey to the West," this dinosaur lived more than 161 million years ago, when the Late Jurassic Period was just getting underway, according to scientists at George Washington University who made the discovery in northwestern China.

James Clark, a GW biologist, and a team that included his then doctoral student Jonah Choiniere made the find in 2006 at the Shishugou Formation in a remote part of Xinjiang. Aorun is the fourth coelurosaur found in this formation, which has yielded a remarkable diversity of theropods, a group of mostly carnivorous dinosaurs that walked on two legs.

The beasts preserved in the Shishugou deposits date back to a period straddling the Middle and Late Jurassic Period, a time when dinosaurs had just begun to reach enormous sizes and dominate ecosystems on land, Clark's website notes.

"All that was exposed on the surface was a bit of the leg," Clark said in a statement. "We were pleasantly surprised to find a skull buried in the rock too."

A closer look at the fossils showed that the bones had not fully developed.

"We were able to look at microscopic details of Aorun's bones and they showed that the animal was less than a year old when it died on the banks of a stream," said Choiniere.

Choiniere is now a senior researcher at the Evolutionary Studies Institute at the University of the Witwatersrand in Johannesburg, South Africa. In addition to being a GW doctoral student at the time of the discovery, Choiniere was also a Kalbfleisch Fellow and Gerstner Scholar at the American Museum of Natural History.

The research was detailed May 3 in the Journal of Systematic Palaeontology.