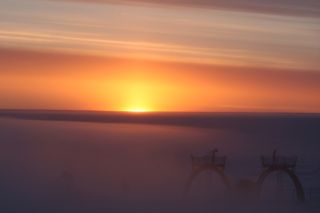 The sun setting over the Concordia research station in Antarctica.
(Image: © ESA/IPEV/PNRA - A.Salam)

What does an Antarctic sunset look like? A stunning camera shot, released last week by a researcher at the Concordia Station, a research base in Antarctica, reveals the answer in all its glory.

This may be the last view of the sun the staff members at the station see for the next four months, with the onset of the Antarctic winter. During this time, there is no sunlight.

Concordia Station, a joint French-Italian research station, is located in the center of the East Antarctic Ice Sheet. It's so isolated and dark that the European Space Agency uses it as an analog for long-distance manned spaceflight. It's also too cold for planes to land in the area, so researchers are marooned for the 4-month winter.

Wooden platforms serve as observation posts for astronomers. Because there is no light pollution and little overall air pollution, Antarctica offers spectacular views of the night sky.

The research station, which was completed in 2004, houses about 75 scientists during the Southern Hemisphere's summer, but the crew shrinks to 14 during the winter months, when temperatures plunge to around minus 112 degrees Fahrenheit (minus 80 degrees Celsius).