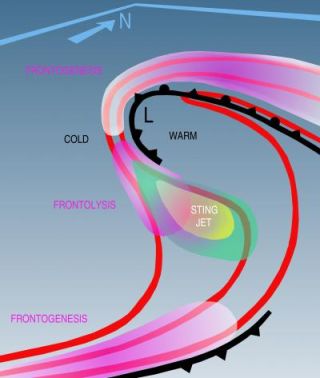 Sting jets form in hook-like weather patterns, where air rushed from warm to cold fronts.
(Image: © The University of Manchester)

Though they are linked to powerful storms called extratropical cyclones, predicting where and when sting jets will hit has been a challenge for forecasters. Now, a new study sheds light on how sting jets form.

Sting jets get their name from the hooked tail of clouds that spawn the fierce gusts — the clouds resemble a scorpion's tail. The winds usually hit over a small region, about 30 miles (50 kilometers) across, according to the U.K. Met Office. Sting jets were responsible for deaths and widespread damage during the infamous Great Storm of 1987 in Britain, which impelled scientists to hunt for the cause.

On the south side of the cloud tail, sting jets form when air rushes downward from a warm front to a cold front, researchers have found. In the new study, which relied on satellite data, researchers discovered the winds strike where the storm's temperature gradient, or difference in temperature between two locations, was weakest. The study was published online March 21 in the journal Weather and Forecasting. [Watch How Sting Jets Form]

"The irony is that the winds are strongest in the cyclone where the front is weakening most intensely," David Schultz, lead study author and a professor at the University of Manchester, said in a statement.

"Our findings are significant because they tell us exactly where we can expect these winds and give forecasters added knowledge about the physical processes that are going on to create this region of strong winds."

Schultz and his colleagues also suggest that sting jets only arise in a certain type of storm, called Shapiro-Keyser cyclones. These have a "T-bone" structure that keeps the warm and cold fronts within the storm from meeting, and a back-bent front that is just the right shape for triggering sting jets.