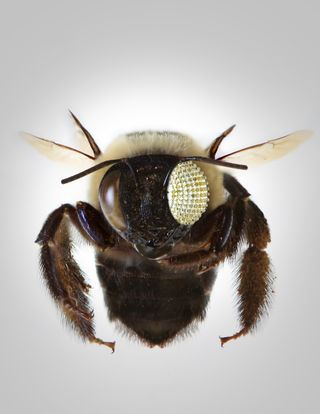 Researchers have created a camera that mimics an insect's compound vision.
(Image: © University of Illinois and Beckman Institute)

The insect-inspired camera consists of a hemispherical surface studded with a dense array of lenses and photo detectors. The device could be used in applications ranging from surveillance to the scoping of the human body.

The compound eyes of insects have many advantages: a wide field of view, good motion sensitivity and an infinite depth of field (the distance between objects in the image that appear sharp). Each eye contains hundreds to thousands of imaging units called ommatidia — each with a tiny lens and crystalline cone that transports the light to light-sensitive cells. Researchers modeled the new digital camera after these eyes.

"The design itself is inspired directly by the configuration of an insect eye," said senior study author John Rogers, a materials scientist at the University of Illinois at Urbana-Champaign. [Image Gallery: Bug's Eye Camera]

The bug-eye cam consists of a flexible array of 180 artificial ommatidia, comparable to the number in the eyes of fire ants or bark beetles (but much fewer than in dragonflies, which have about 30,000). Each ommatidium is a tiny lens on a supporting post that transports light down to a light-sensing silicon photodetector.

The researchers fabricated the arrays of lenses and detectors in flat, 2D sheets. The sheets were bonded together and then inflated into a hemispherical shape, like a real eye.

The camera has a field of view of about 160 degrees, or almost half a sphere, simulations suggest.

Today's digital cameras are built using charge-coupled devices, or CCDs, which have millions of imaging units. They are built on flat (planar), rigid silicon wafers.

"What we've done is try to create an array of photodetectors, plus an array of microlenses, using technologies already developed," Rogers said. "But instead of leaving it in a planar geometry, we build it in a configuration so they are stretchable and can be deformed like latex."

But does the camera actually let people see the world the way a bug does? Simulations and models suggest it does, though "it's hard to figure out what an ant sees," Rogers said. Each lens samples a tiny part of the surroundings, but together they create an aggregate image that remains crisp, even at the periphery. "I think evolution has determined it's a very powerful capability," Rogers said.

Compound lens-based imaging systems have been developed previously, but only in planar form, or in large, handmade versions. In contrast, the new camera is manufactured in a way that could be scalable to millions of ommatidia — "way beyond the insect world," Rogers said.

The camera system was described online today (May 1) in the journal Nature.