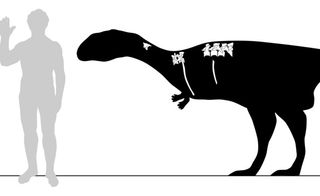 Researchers have discovered the remains of a meat-eating dinosaur named Dahalokely tokana on the island of Madagascar. Dahalokely was between 9 feet and 14 feet (2.7 and 4.3 meters) long.
(Image: © Andrew Farke and Joseph Sertich)

A new species of dinosaur from the island of Madagascar has been identified.

Dubbed Dahalokely tokana by its discoverers, the dinosaur was a member of a group called abelisauroids, carnivorous dinosaurs from the Cretaceous period that were common in the Southern Hemisphere, according to a news release. In fact, the dinosaur is the oldest abelisauroid to date found on the island of Madagascar, the researchers write online April 18 in the open-access journal PLOS ONE.

Dahalokely was between 9 feet and 14 feet (2.7 and 4.3 meters) long and probably lived only in Madagascar and India. The two landmasses were once connected, and were isolated in the Indian Ocean; they broke apart some 88 million years ago. [Image Gallery: 25 Amazing Ancient Beasts]

The reptile's unusual name — which roughly translates to "lonely little cattle rustler" — is derived from the Malagasy language, "rather than the 'traditional' (and Eurocentric) Greek or Latin," paleontologist and project leader Andrew Farke wrote on a PLOS blog.

"A 'dahalo' is a thief — most often a cattle rustler. We chose this part because our dinosaur was almost certainly a predator," Farke wrote. "'Kely' means 'little,' because the dinosaur was certainly on the small end of things, even for an abelisauroid.

"Finally, 'tokana' means lonely — and this dinosaur would indeed have been lonely, way out there in the middle of the Indian Ocean with no way to get off the island!" Farke wrote.

The finding is particularly important because it helps fill in a 95-million-year gap in the island's fossil record: Previously, no dinosaur fossils from the period between 165 million and 70 million years ago could be identified in Madagascar.

"We had always suspected that abelisaurids were in Madagascar 90 million years ago, because they were also found in younger rocks on the island," Farke said in a statement. "Dahalokely nicely confirms this hypothesis."

D. tokana was also related to some other famous beasts. "This dinosaur was closely related to other famous dinosaurs from the southern continents, like the horned Carnotaurus from Argentina and Majungasaurus, also from Madagascar," project member Joseph Sertich, curator of vertebrate paleontology at the Denver Museum of Nature & Science, said in a statement.

A self-described "dinosaur-loving kid who never grew up," Sertich told the San Jose Mercury News, "It's not uncommon to find new things when looking in new areas."

The Dahalokely fossils were discovered in the northernmost end of Madagascar near the town of Antsiranana.