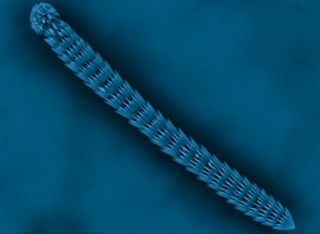 Just 10 micrometers in diameter, the needlelike spicule from the sea squirt Herdmania momus helped researchers in Israel and Wisconsin unlock the crystal structure of vaterite, a geologic and biogenic mineral whose structural secrets have stymied scientists for almost 100 years.
(Image: © Pupa U. P. A. Gilbert, Lee Kabalah-Amitai, Boaz Pokroy)

The crystal structure of a mineral found in a solitary sea squirt, a filter-feeding blob that lives throughout the Mediterranean and Red Seas, has been solved.

The mineral, called vaterite, has a crystal structure that has eluded scientists for nearly a century. Now, researchers have discovered that the mineral has two different crystal structures that coexist within a single "pseudo-crystal."

The findings were published today (April 25) in the journal Science.

The crystal structure of a mineral determines where the atoms in it are arranged, and it can radically change a mineral's properties. For instance, graphite and a diamond have the same chemical formula, but different crystal structures.

For years, scientists have puzzled over the mysterious crystal structure of vaterite. A form of calcium carbonate, vaterite has been found in Portland cement, human gallstones and even on a meteorite. [Fallen Stars: A Gallery of Famous Meteorites]

While vaterite does sometimes form in the ground, once it forms, it rapidly changes to a more stable crystal structure, either aragonite or calcite. However, vaterite is stable when found in the bodies of the Herdmania momus sea squirt, a hollow-bodied filter feeder without a backbone.

Solving the crystal structure proved difficult because researchers had trouble finding large, single, pure crystals, said study co-author Pupa U. P. A. Gilbert, a biophysicist at the University of Wisconsin-Madison. To get around this, Gilbert and her colleagues looked to the vaterite found in the microscopic, calcareous spicules of this particular sea squirt.

"It's made of very beautiful, perfect crystals at the atomic scale," Gilbert told LiveScience.

Using a high-resolution transmission-electron microscope, the team analyzed the tiny, spiky structures (spicules) from the sea squirt's outer body. The spicules were only 10 to 11 microns wide and each looked like crowns of thorns. (There are more than 25,000 microns in 1 inch.)

The team found something very strange.

When looked at down one axis, vaterite appears to have one crystal structure, but when looked at across the other axis, two distinct structures were revealed.

While one of the crystal structures is well characterized, the researchers need to do follow-up work to understand the second one, Gilbert said.

It's also still a mystery why vaterite is stable in the sea squirt, she said.