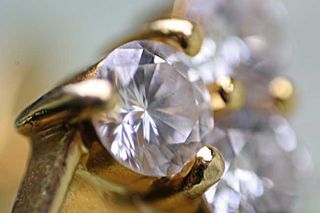 Sure, diamonds are shiny and sparkly, but their beauty may ultimately come from their unique crystal structure, one mathematician says.

Toshikazu Sunada, of Japan's Meiji University, conducted a mathematical analysis of the crystal structure of diamond and found that it has certain special properties, especially in its symmetry.

In a crystal, atoms are packed in ordered, repeating patterns, with the bonds between them holding them tightly together. Crystals can be represented in models by points (representing the atoms) connected by lines, or edges in particular patterns.

Two main patterns emerge in crystals: the pattern of edges connecting the points (or of the bonds between atoms) and the pattern of a network of connected edges and vertices that repeats throughout the crystal.

Diamonds have two key properties that distinguish them from other crystals. One is called "maximal symmetry"—while other crystals can be deformed in models to make them more symmetric, diamond cannot.

Diamond also has a property similar to circles and spheres, which look the same no matter which way you rotate them. Similarly, a diamond crystal looks the same when viewed from the direction of any edge.

Sunada discovered that out of an infinite universe of mathematical crystals, only one other shares these two properties with diamond, a theoretical model Sunada calls the "K_4 crystal."

"The K_4 crystal looks no less beautiful than the diamond crystal," Sunada said, adding that though it is only theoretical now, it could one day be found in nature or created.

Sunada's work is detailed in the Jan. 3 issue of the Notices of the American Mathematical Society.