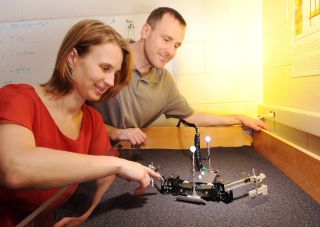 Flippered robots inspired by sea-turtle hatchlings could shed light on how the ancestors of terrestrial animals first evolved to crawl on land, researchers say.

Such research could also lead to amphibious robots that can tackle both land and sea, investigators added.

Scientists are designing robots that can go where humans cannot or should not go, and often rely on inspiration from nature to do so. For instance, snakelike robots could, in principle, slither into crevices to help find disaster victims.

Challenging environments for robots to cross include sand, gravel, soil, mud and other unstable granular surfaces that can deform around legs in complex ways. To learn new ways to navigate such ground, Daniel Goldman, a physicist at the Georgia Institute of Technology in Atlanta, and his colleagues investigated sea-turtle hatchlings.

"These little turtles are remarkably effective at moving over solid ground, with limbs designed for moving in fluid," Goldman told TechNewsDaily.

The researchers analyzed 25 baby loggerhead sea turtles from nests on Jekyll Island, one of Georgia's coastal islands, at night. They investigated how the turtles crawled on tracks of beach sand housed in a truck parked near the beach, video-recording them as they moved in the darkness toward a light that simulated the moon. [See also: 10 Animal-Inspired Robots]

Goldman and his colleagues Nicole Mazouchova and Paul Umbanhowar were surprised to learn the hatchlings moved about as quickly on soft sand as they did on hard sand.

"The turtles insert their flippers just deep enough into soft sand so that the material does not yield behind the flipper as they move," Goldman said. "That means the sand doesn't flow around the flippers, and they don't slip — so they can propel themselves."

The key to performing well, regardless of the conditions of the sand, seemed to lie in how the turtles controlled their wrists.

"On hard ground, their wrists locked in place, and they pivoted about a fixed arm," Goldman said. "On soft sand, they put their flippers into the sand, and the wrist would bend as they moved forward. We decided to investigate this using a robot model."

These findings led to the development of FlipperBot, the first robot to employ flippers against malleable surfaces. The small droid is about 7.5 inches (19 centimeters) long, weighs 2 lbs. (970 grams), and has two motor-driven flippers with flexible wrists similar to sea turtle wrists

In experiments involving a bed of poppy seeds that simulated sand, the flexible wrist helped FlipperBot minimize slipping while moving forward. The flexible wrist also helped keep the robot's body angled away from the ground, minimizing drag from belly friction that could slow it down.

"It was surprising how sensitive this locomotion was to small changes in how the flippers move," Goldman said. "If you change things — even by a millimeter — it could be enough to make the thing move either well or poorly."

The robot and the turtles often did poorly when their limbs encountered sandy ground that had already been disturbed.

"If the ground the flippers go into was disturbed already, the flippers penetrate more deeply, and that causes the body to not lift as high and the belly to drag more," Goldman said. Successful flipper-based movement may depend on having flexible wrists that allow them to move without disturbing too much sand.

"Very small changes in gait or body structure can cause dramatic decreases in speed," Umbanhowar added.

These findings might help scientists better understand how turtle flippers work — which, in turn, could help build robots designed to both swim through water and walk on land.

"This work can provide fundamental information on what makes flippers good or bad," Goldman said.

In future studies, the robots could also help researchers understand how turtles, and other creatures with limbs designed for swimming, evolved to walk on land.

"We are now working with paleontologists on studying what the first animals moving on land were like with more paleontologically realistic robots," Goldman said. "These animals were not moving on concrete, on hard rock, but likely encountered materiallike sand and mud — which can flow and yield upon footsteps —and their limbs were likely flipperlike."

"The natural beach habitat of hatchling sea turtles is endangered by human activity," Mazouchova said. "Robot modeling can provide us with a tool to test environmental characteristics of the beach and implement efforts for conservation."

Goldman, Mazouchova and Umbanhowar detailed their findings April 24 in the journal Bioinspiration & Biomimetics.