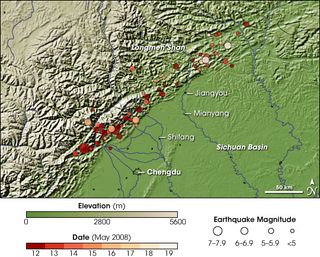 The strong earthquake that struck China's Sichuan province at 8:47 a.m. local time Saturday (April 20) probably hit along the same fault as the region's devastating 2008 earthquake, according to the U.S. Geological Survey.

The epicenter of the magnitude-6.6 earthquake was likely on the Longmen Shan Fault, the USGS said in a report on the April 20 quake. It was centered at a relatively shallow 7.6 miles (12.3 kilometers) below the surface, similar to the 2008 temblor. The 2008 earthquake, a magnitude 7.9, killed more than 69,000 people and released 89 times more energy than yesterday's earthquake.

The Longmen Shan Fault is actually a zone of tectonically-related thrust faults that mark the boundary between the high Tibetan Plateau and the Sichuan Basin lowlands. With each earthquake, a fault thrusts the plateau over the basin, shortening the distance between the two regions. The fault zone stretches more than 150 miles (240 km) along the base of the Longmen Shan Mountains. The mountain front is known for its amazingly steep rise — from 2,000 feet (600 meters) elevation in the basin to 21,325 feet (6,500 m) in the mountains, all in just 30 miles (50 km).

The earthquakes in Sichuan ultimately result from the collision between the Indian and Eurasian tectonic plates, according to the USGS. As India drives northward into Asia, it forces the Tibetan Plateau out of its way, eastward into China.

The geologic setting of the Sichuan Basin also worsens earthquake damage. As seismic waves travels across the basin's deep pile of sediments, the waves slow down, spending more time shaking the area, according to a Caltech report prepared after the 2008 earthquake. Their strength also increases, compounding damage from shaking, the report said.

More than 175 people were reported killed and 6,700 people injured in Saturday's earthquake, which was centered about 80 miles (129 km) southwest of Chengdu, the capital of Sichuan Provice. However, reports have not come in from remote mountain villages, which could be damaged by landslides.

Some of China's biggest earthquakes have hit along the Longmen Shan Fault, including four magnitude-6.0 or bigger temblors in the past 40 years, the USGS said. The magnitude-7.5 Diexi earthquake in 1933 killed more than 9,300 people.