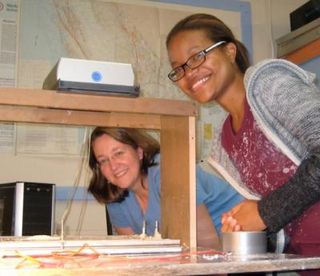 Michele Cooke's UMass Amherst lab is one of only a handful worldwide to use a relatively new modeling technique that uses kaolin clay rather than sand to better understand the behavior of Earth's crust.
(Image: © UMass Amherst)

The Earth's crust may have something in common with a lot of people: It tends to be lazy, at least when it comes to moving along certain types of seismic faults, new research says.

Using a special clay system to model a strike-slip fault (where one tectonic plate slides past another) with a bend that restrains the fault's movement, researchers found that the crust tends to develop smaller faults around the restraining bend to minimize the fault system's overall workload.

"In other words, the faults grow to make the system more efficient," said Michele Cooke, a geophysicist at the University of Massachusetts Amherst who led the study. "Since a bend is a place where the fault is inefficient, this is an interesting area to look."

Restraining bends like the ones in Cooke's experiments can be found where the southern San Andreas Fault bends around the San Gabriel Mountains; in Lebanon, along the Dead Sea Fault; and in many other places around the globe. This type of experiment can help scientists better understand potential seismic hazards in these areas, Cooke said.

The clay-based model helped Cooke explain how this type of fault system grows over time.

Most other models use dry sand, which is less cohesive than the kaolin clay used in her experiments. Whereas dry sand will always form new faults when it's under stress, the wetter kaolin clay maintains previously formed faults and allows them to continue slipping. These qualities not only changes the physics of the system, but it also makes it possible to measure and characterize the faults, because the kaolin preserves them.

"This is just like the Earth, which doesn't make new faults all the time. Faults along plate boundaries will be active for millions of years," Cooke told OurAmazingPlanet.

The kaolin-clay model measures 2.7 square feet (0.25 square meters) and is five orders of magnitude thinner than the Earth's crust. To make the kaolin clay behave like real rocks in the crust, the researchers made the clay in the model five orders of magnitude weaker than typical crustal materials. This scaling helps ensure that the stresses in the model accurately simulate the much larger stresses in the Earth.

Scientists have previously thought that new faults formed when the stress around the faults was greater than the strength of the rock. But this seemingly simple idea hasn't helped predict fault ruptures in the real world. Dry sand and numerical models still can't accurately predict restraining-bend evolution, Cooke said.

Her new model shows there is some method to the faulting madness.

In Cooke's model, faults developed around the restraining bend as long as the bend was greater than 15 degrees, and especially if the bend was 30 degrees or more, she found. New faults grow in order to minimize work within the fault system — an idea Cooke has dubbed the "Lazy Earth" hypothesis.

Her results, published online Feb. 19 in the Journal of Structural Geology, lend hope that researchers will be able to better predict seismic hazards in regions near restraining bends.

One example, in particular, may hit close to home for quake-wary Southern Californians: "These experiments suggest that many, many thousand years from now, we might see a new fault form along the San Andreas, in the region north of Palm Springs," Cooke said. "But the geology there is very complicated — much more complex than the clay box — so prediction is difficult."