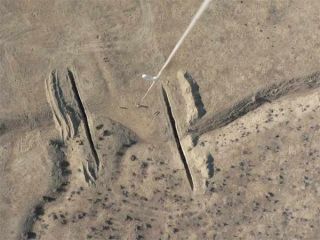 If plate tectonics followed the laws of Hollywood physics, Los Angeles would be tearing violently from the mainland as we speak.
(Image: © Ramón Arrowsmith, Arizona State University.)

If plate tectonics followed the laws of Hollywood physics, Los Angeles would be tearing violently from the mainland as we speak. The scenario would probably include a buxom seismologist and a secret nuclear warhead, too.

But rest assured that, outside the movies, California Island won't be popping up on any maps. Much of California does lie along the San Andreas Fault, an 800-mile fracture in the Earth's crust stretching from the Gulf of California to San Francisco. Here two immense plates of rock, floating on a semi-molten layer, meet and move against each other in what's called a strike-slip fault. The stress caused by this movement can result in devastating earthquakes, like the 1906 quake that destroyed much of San Francisco.

But the motion between these two rock masses beneath the Golden State is mostly horizontal. That is, the Pacific plate is moving "up" the coast, not away from the North American plate, at a rate of dozens of millimeters per year.

So in several million years, residents of San Francisco will see the L.A. skyline out their windows.