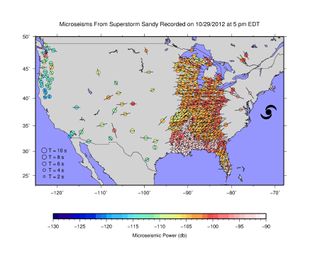 This map shows that when Hurricane Sandy turned toward the East Coast on Oct. 29, 2012, seismometers "lit up" because of ground shaking from ocean waves.
(Image: © Keith Koper, University of Utah Seismograph Stations.)

Hurricane Sandy's fateful left turn toward the mid-Atlantic Coast in October last year lit up earthquake monitors all the way to Seattle, according to results presented at the Seismological Society of America's annual meeting today (April 18).

When Hurricane Sandy veered on Oct. 29, the sudden increase in crashing ocean waves sent rumbles through the Earth detectable on seismometers. The wave-on-wave collisions created what are called standing waves, doubling the energy directed at the seafloor, scientists reported today. The ocean gave the seafloor a little shove, sending seismic waves through the Earth.

The tremors are roughly similar to a magnitude-2 or magnitude-3 earthquake, but have a unique signal on seismometers, distinct from the rapid shaking caused by earthquakes, said Oner Sufri, lead study author and a geophysics doctoral student at the University of Utah. [Watch Sandy shake the U.S.]

Hurricane Sandy's tremors, called microseisms, were detected by Earthscope, a traveling array of about 500 portable seismometers that are tracing a roughly rectangular swath across the United States.

The earthquake-detection network also picked up waves pounding the Atlantic coastline, but the energy from colliding ocean waves was much more powerful, said Keith Koper, study co-author and director of the University of Utah Seismograph Stations.

"The turning of the storm created strong wave-on-wave interactions that increased the microseism energy," Koper told OurAmazingPlanet. "When the storm turned north of the Bahamas, we saw a bump in the microseismic energy, and when it took that sharp left-hand turn, we saw an even bigger bump," he said.

Sufri said he is examining microseisms from Hurricane Sandy and other natural ocean sources to use the tremors as a tool for investigating climate changes.

For example, as scientists better understand how hurricanes show up in seismic records, they could look at historic storms tracking across the country, before the advent of satellites, Sufri said.

"Because these microseisms are happening all over the Earth, we could have a better understanding of climate, ocean and solid-Earth interactions," he said.