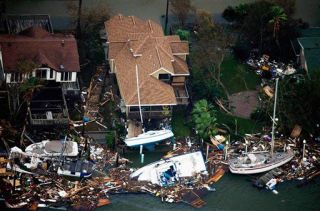 The Caribbean and Gulf Coast have seen a spate of devastating hurricanes in recent years that have cost billions of dollars and thousands of lives. As residents recover from the latest hits, they may wonder about the potential for future Ikes and Katrinas.

Hurricanes, of course, are nothing new to the Atlantic and Gulf of Mexico, where tropical storms form between June and November each year. But many factors, both natural and man-made, can affect the number, strength, size and impact of the storms that form each season. For example, the recent surge in storms followed an almost two-decade lull that was part of a natural cycle in hurricane formation.

During that lull, new coastal residents built homes in what they thought was a paradise. But now they've found out just how susceptible they are to nature's wrath. And it looks like the situation might only get worse.

In 2003, more than half the U.S. population (or about 153 million people) lived along the Gulf and Southeastern U.S. coastline — an increase of 33 million people from 1980 — and that number is just expected to keep rising.

The buildup of these communities in recent decades and the environmental damage that development has caused exacerbate the impact of hurricanes.

"There's been an explosion of population along our coast," said Amanda Staudt, a climate scientist with the National Wildlife Federation (NWF). "That's just putting a lot more people in harm's way."

This is particularly true in Florida, Texas and North Carolina, where populations are increasing the fastest. Hurricanes are especially a threat for homes right on the beach or on barrier islands, such as Galveston, because they receive the full brunt of a hurricane's storm surge.

Coastal features such as barrier islands and wetlands act as natural protection against a hurricane's storm surge, slowing it down and absorbing some of the impact. Studies have shown that every mile of wetlands reduces storm surge by about 3 to 9 inches and every acre reduces the cost of damages from a storm by $3,300, Staudt said.

"Our wetlands and barrier islands … are our first line of defense," she said.

But the development boom in coastal areas has damaged these natural defenses, putting coastal residents even more at risk.

"The more we develop, the more we lose," Staudt told LiveScience.

The National Oceanic and Atmospheric Administration estimates that since the 1700s, the lower 48 states have lost more than half of their wetlands. While not all of that acreage loss is right along the coast, and some is likely a result of natural changes along the shoreline, a good chunk is due to development.

For instance, some of the Katrina damage to New Orleans was partly a result of the damage to the protective wetlands along Louisiana's coast. Development and subsidence, or outright sinking, of the state's coastline today mean that Louisiana loses an area of wetlands equivalent to the size of 32 football fields every day, according to the NWF.

Many hurricane experts have warned for years against destructive coastal development and imprudent policies that encourage people to build in coastal areas, but that often doesn't stop the building.

Meanwhile, the oceans are growing warmer. Global ocean temperatures have risen by about 0.2 degrees Fahrenheit (0.1 degrees Celsius) in the last 30 years. And hurricanes are fueled by the warm, moist air over the tropical Atlantic and the Gulf of Mexico. The warmer the ocean surface, the more energy is available to fuel a storm's ferocious winds.

Scientists have predicted that as global warming continues to heat up the ocean, hurricanes could become more frequent, more intense or both, and several scientists think that change is already evident.

As sea surface temperatures rise, they provide more fuel to the convection that drives the swirling storms. This added energy could notch up the speed of hurricanes' winds (though several scientists say the winds can only increase so much). One recent study suggested that the strongest hurricanes in particular would get a bump from warming waters.

The rainfall brought by hurricanes could also increase because as the Earth's atmosphere also warms, it can hold more moisture. Studies have shown that one of the most damaging parts of a storm can actually be the rain it dumps on inland areas.

Rising sea levels could increase the damage wrought to coastal areas by a hurricane's storm surge.

Of course, the changes man has made to coastlines and the climate system aren't the only thing affecting the intensity of any particular hurricane season. Mother Nature provides plenty of variation as well.

Natural fluctuations in the climate that occur over a matter of years, such as El Nino and its sister La Nina, can also affect how busy the Atlantic hurricane season is.

El Nino events, which occur when tropical Pacific waters become warmer, can change the flow of prevailing air currents and stifle hurricane development in the Atlantic. Forecasters think that an El Nino event was the reason for the calm 2006 hurricane season, which came after two of the busiest years for hurricanes on record. La Ninas (when tropical Pacific water become cooler) typically mean more hurricanes.

Another natural cycle, called the Atlantic Multidecadal Oscillation, can affect hurricane frequency over several decades through changes in sea surface temperatures, and is thought to be linked to the relative lull in hurricanes during the 1970s and 80s.

While natural cycles can affect hurricane activity from year-to-year or even decade-to-decade, most climate scientists think that global warming will continue to fuel these storms, and accompanied by the increasing coastal population and environmental degradation, lead to the "increasing destructive power of storms," Staudt said.