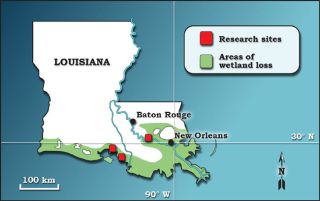 The sinking of Louisiana's Gulf coast could be due to the shallowest delta sediments pushing down the underneath layers, a new study suggests.

Louisiana's coastal erosion causes the loss of land at a catastrophic rate of 25 to 35 square miles per year, equivalent to one football field every 15 minutes. [Map]

Many scientists believe that the subsidence, as the sinking is called, takes place because as sediment accumulates and the Mississippi Delta thickens, the crust of the Earth as a whole gets pressed downward. The withdrawal of oil, gas, and groundwater are also blamed for the submerging delta. (Similar subsidence has been noted in Southern California and in many other states due to extensive pumping of groundwater, petroleum products and other reasons.)

While erosion is a big problem, the layer 30 to 50 feet beneath much of the Mississippi Delta has been highly stable for the past 8,000 years with negligible subsidence rates. So scientists wondered whether a sinking of the Earth's whole crust was really to blame for the  subsidence.

By reconstructing sea level rise and sediment accumulation over the past 8,000 years, the researchers showed that large portions of the Mississippi Delta's basement land are in fact stable and not the reason for the sinking.

"If that were the whole story, there would be major consequences for Louisiana, because subsidence of Earth's crust is a natural process that remains beyond human control," said study leader Torbjorn Tornqvist of Tulane University.

The new study suggests, instead, that compaction of the most recent sediments, near the surface, causes the land to subside.

The young delta sediments, rich in water and heavy, are pressing down and squeezing the water out of the older sediments beneath and allowing the surface to sink, Tornqvist explained. [Graphic]

"Our research could have major implications for rebuilding plans that are currently being debated," Tornqvist said. "Over the long term, comprehensive understanding of subsidence will better support rational coastal management and successful urban and land-use planning for all low-lying areas along the Gulf Coast."

The study is detailed in the August issue of the journal Geology.