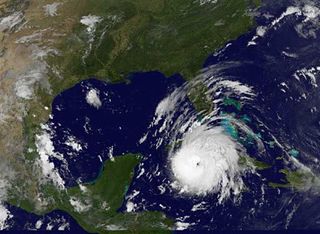 Strong hurricanes are getting stronger, likely thanks to global warming, a new study finds.

Scientists have previously predicted that as global warming further heats up the ocean, hurricanes could become more frequent, more intense or both. The new work is in line with some of those previous studies but projects that it is the strongest of these storms — the Katrinas and Andrews — that will suck up this extra heat energy and become even stronger. The research is detailed in the Sept. 4 issue of the journal Nature. Heat engine The theory behind the formation of tropical cyclones (the term that encompasses hurricanes and other tropical storms) is that the warm, moist air over the ocean surface fuels the storm's convection. The warmer the ocean surface, the more energy is available to fuel a storm's ferocious winds. James Elsner of Florida State University and his colleagues studied the wind-speed data from a 25-year satellite record of storms across the globe. They found that warmer ocean temperatures matched up with an increase in the highest wind speeds achieved by storms. Weaker storms have other factors besides sea surface temperature influencing them: wind shear (which can stifle hurricane formation); interaction with other storms (this happened with Gustav and Hanna); and travel over land (which weakens a storm because it is cut off from its fuel source, the warm ocean water). Stronger storms generally develop because these weakening factors aren’t in play, making it easier to see the boost they get from warmer oceans, Elsner said. However, weaker storms would also probably show a slight strengthening due to warmer waters with all other factors being taken into account, he said. The North Atlantic and north Indian Ocean basins showed the strongest intensification signals in wind speed with increasing ocean temperature. Elsner said that this is expected because these basins are colder and would show a stronger response to any warming, whereas basins that are already warm are optimized for storm formation. "We speculate that it has to do with the fact that, you know, there is kind of a saturation point," Elsner told LiveScience. "You can't just keep getting strong hurricanes as the ocean warms up." Globally, the researchers found a 31 percent increase in strong storms (those in the top fifth in a ranking of storms by their intensities), from 13 to 17 strong cyclones for a 1.8 degree Fahrenheit (1 degree Celsius) rise in ocean temperature. Speed limit? Other researchers have looked into whether there might be a cap on wind speeds. According to a 1998 calculation by MIT climatologist Kerry Emanuel, the estimated maximum potential for hurricanes is about 190 mph. Emanuel and other scientists have predicted that wind speeds — including maximum wind speeds — should increase about 5 percent for every 1 degree Celsius increase in tropical ocean temperatures. [Using observed data to arrive at actual wind speeds for this, Elsner and his colleagues found, for the same 1-degree C ocean temperature increase, wind speed increases of around 4.5 mph (2 meters per second) for storms in the top fifth of the intensity ranking, and wind speed increases of around 14.5 mph (6.5 meters per second) for storms in the top tenth.] However, Typhoon Nancy in 1961, in the Northwest Pacific Ocean, was said to have maximum sustained winds of 215 mph, according to the World Meteorological Organization's Commission on Climatology, a clearinghouse for climate records set up at Arizona State University to settle the many disputes on weather and climate extremes. (A typhoon is the same thing as a hurricane, just in a different part of the world.) There are known records for wind speeds that outstrip anything ever measured in a hurricane. The fastest "regular" wind that's widely agreed upon was 231 mph, recorded at Mount Washington, New Hampshire, on April 12, 1934. During a May 1999 tornado in Oklahoma, researchers clocked the wind at 318 mph. Forecasters recently said that warm ocean surface temperatures will make September a busy month of Atlantic storms.