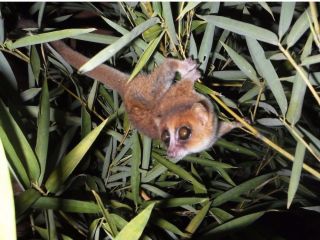 Two new species of lemur look so similar that it's impossible to tell them apart without sequencing their genes.

The itsy-bitsy primates are both mouse lemurs, which are tiny, nocturnal lemurs that measure less than 11 inches (27 centimeters) from nose to tail. The newly discovered Madagascar natives have gray-brown coats and weigh only 2.5 to 3 ounces (65-85 grams).

Study researcher Rodin Rasoloarison of the University of Antananarivo in Madagascar first captured specimens of the two new species in 2003 and 2007. He weighed the animals, measured them and took small skin samples for later analysis.

In fact, the International Union for the Conservation of Nature (IUCN) declared the Marohita mouse lemur "endangered" before scientists had even finalized and formalized its name and description. It's a fate shared by many lemurs in Madacasgar, where slash-and-burn agriculture is taking a toll on the forests.

"This species is a prime example of the current state of many other lemur species," said study researcher Peter Kappeler of the German Primate Center in Goettingen. Lemurs are the most endangered mammals on the planet, with 91 percent of known species threatened by extinction.

Researchers want to preserve lemurs not only for their own sake, but for humans' sake as well. As a primate, the mouse lemur is more closely related to humans than rats or mice, which are commonly used in medical research. The grey mouse lemur (Microcebus murinus) develops a neurological disease much like Alzheimer's, making it an important model for understanding the human brain.

"Before we can say whether a particular genetic variant in mouse lemurs is associated with Alzheimer's, we need to know whether that variant is specific to all mouse lemurs or just select species," said Anne Yoder, the director of the Duke University Lemur Center. "Every new mouse lemur species we sample in the wild will help researchers put the genetic diversity we see in grey mouse lemurs in a broader context."

The researchers reported their findings March 26 in the International Journal of Primatology.