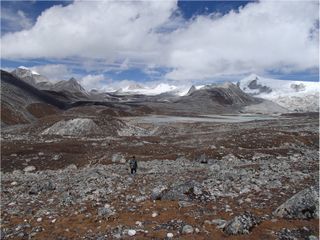 NEW YORK — The distribution of water in Asia's highest mountains and driest deserts tells an important story of climate change.

Almost half the world's population gets its water from glacier melt and rainfall in the Himalayas and other lofty peaks, yet little is understood about how climate change will affect these water sources. Now, using sophisticated technology and old-fashioned fieldwork, scientists are looking into the past to solve this mystery.

"We're trying to understand the relationships between climate and glaciers and Earth's water resources from the perspective of Earth's paleoclimate," geologist Aaron Putnam of the Lamont Doherty Earth Observatory said in a talk at the Columbic Club in New York on March 12. He described his recent expeditions along the Silk Road, from the Tien Shan Mountains to the Taklamakan Desert to the Bhutanese Himalayas.

Putnam and colleagues set out in 2010 to the Tarim Basin in Northwest China, right in the center of Asia. Within the Tien Shan Mountains, a range that extends some 1,740 miles (2,800 kilometers), the scientists studied masses of soil and rock debris built up by glaciers, called moraines, which held clues to the past climate. [Stunning Scenes: From the Himalayas to the Taklamakan Desert]

To determine the ages of the moraines, the researchers used a technique known as beryllium-10 exposure dating. Cosmic radiation constantly bombards the Earth's surface, changing the form of some of the elements, like beryllium, in rocks. Based on these changes, the scientists could determine how long the moraines had been there, which allowed researchers to reconstruct the glaciers' past positions. "We can see what the ice looked like and know exactly when the ice was there," Putnam said.

Deep in the desert

Next, Putnam and colleagues ventured to the Taklamakan Desert. New roads have made the desert accessible, "so we were able to access lands people had died trying to visit even a decade ago," Putnam said. He described the area as a parched, desolate landscape with endless expanses of sand dunes.

As the researchers trekked through the desert, they noticed silts, mud cracks, remnants of trees, even shells — all telltale signs of water. To find out when this wet period took place, the scientists used radiocarbon dating, a technique that measures the ratio of different forms of carbon to find an object's age. The scientists also used dendrochronology, a method of determining trees' ages based on their growth rings. The results suggested the wet period occurred from the mid-1100s to the late 1800s.

Putnam and his team then traveled to the easternmost part of the desert to an enormous dry lakebed called Lop Nor. They did radiocarbon dating of shells on the lake's shoreline, finding the shells' ages matched those of the other samples from formerly wet areas. That span of time, from the 12th century to the 19th century, was a cold period in North Atlantic regions. "When it got cold in the North Atlantic, it got wet in the mid-latitude desert regions," Putnam said.

The onset of wet conditions in the Taklamakan Desert corresponds with the rise of Genghis Khan and the Mongol Empire, the largest contiguous land empire in history. The Mongols relied heavily on horses, which would have needed lots of grass to eat. Putnam and his team think the wetting of the desert allowed grasslands to expand, enabling the Mongols to spread throughout Asia. [10 Surprising Ways Weather Changed History]

Next, Putnam and his colleagues headed south to the Himalayas of Bhutan, an area swept by the monsoon. "We don't know how the monsoon will affect glacier behavior in the Himalayas," Putnam said, adding, "We just needed to go there and use good old-fashioned fieldwork to figure it out." The team made a six-day trek to their study site, a glacier-laden plateau.

The journey wasn't easy; it took 25 horses and mules to carry all of the supplies from the deep jungles up to the icy peaks. The team hiked over 15,400-foot-high (4,700 meters) mountain passes, home to creatures like the Himalayan blue sheep, or bharal.

Finally, the team crested Bhutan's Rinchen Zoe plateau. They ventured out onto the glaciers and took ice sample to measure the amount of melt. The scientists used the same beryllium dating method as before to determine the age of the glacial deposits, work that is currently in progress. The team had to leave before the snows came with the approaching winter.

Though the scientists haven't finished their analysis yet, it's clear that the glaciers have substantially receded over the last century, Putnam said, and this will have an impact on the many people who depend on the mountains for water.

With the current global warming trend, Putnam expects to see a northward expansion of the deserts. The insights gained on these expeditions were only possible through fieldwork, Putnam said. "In my opinion, there's no substitute for collecting fundamental data from the natural world," he said.