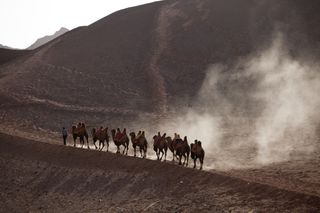 The ancient Silk Road is home to many archaeological sites.
(Image: © hasachai | Shutterstock)

Along the ancient trade route known as the Silk Road, archaeologists have unearthed 102 tombs dating back some 1,300 years — and almost half of the tombs were for infants.

The surprising discovery was made in remote western China, where construction workers digging for a hydroelectric project found the cluster of tombs. Each tomb contains wooden caskets covered in felt, inside of which are desiccated human remains, as well as copper trinkets, pottery and other items buried as sacrificial items, according to UPI.

"The cluster covers an area of 1,500 square meters (1,794 square yards) on a 20-meter high (66 feet) cliff, an unusual location for tombs," said Ai Tao from the Xinjiang Institute of Archaeology, as quoted in the Indian Times.

The tombs, which date back to the Tang Dynasty (618 to 907), also contain a number of well-preserved utensils made from gourds, some of which were placed inside the wooden caskets, the Indian Times reports.

But why so many of the tombs are for infants remains a mystery. "Further research is needed to determine why so many people from that tribe died young," Ai told UPI.

The area where the tombs were found, the Kezilesu Kirgiz Autonomous Prefecture, was an important mountain pass along the Silk Road, a network of ancient trading routes that connected the Far East with Europe.