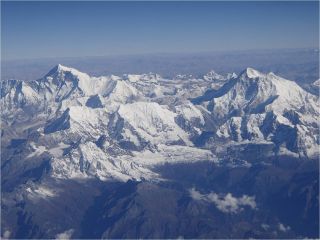 Almost half the world's population gets its water from glaciers and rainfall in Asia's highest mountains and deserts. Geologist Aaron Putnam of Columbia University's Lamont-Doherty Earth Observatory, his father David Putnam, an archaeologist at the University of Maine at Presque Isle, and their colleagues recently visited some of these areas on study expeditions, snapping these striking photos.Above: Looking north toward the high Tien Shan mountains of western China. At center is the highest peak in the Tien Shan: Tomur peak (or Jengish Chokusu in Khirgiz).

Camp beneath the high mountain pass of Tampe La.

Looking north toward the spine of the Himalaya, featuring the high peaks of Makalu (right) and Everest (left).