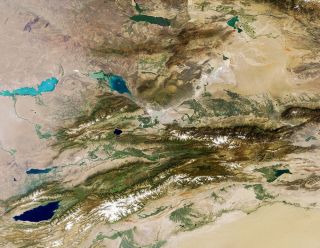 One of the longest mountain ranges in Central Asia, the Tian Shan mountain range, forms a bumpy border between Kazakhstan, Kyrgyzstan and western China.

The Tian Shan, seen here in a picture taken by the recently defunct Envisat satellite, are about 1,740 miles (2,800 kilometers) long.

At altitudes over about 6,500 feet (2,000 meters), spruce trees grow on the mountain slopes, while the lower slopes have natural forests of wild walnuts and apples.

The large, dark lake that splits the mountain range in eastern Kyrgyzstan (in the lower-left corner of the image) is the second largest salt lake after the Caspian Sea. The lake is called Issyk Kul – 'hot lake' in the Kyrgyz language — because it never freezes over. It covers an area of over 2,300 square miles (6,000 square km) and reaches over 1,900 feet (600 m) deep.

The area was a stopover along the ancient Silk Road, a trading route that ran from the Far East to Europe. Some historians think it was the starting point of the Black Death in the 14th century.