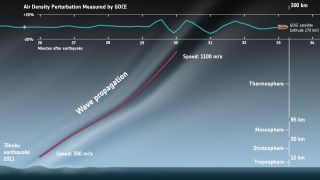 Earthquakes rattle the ground, vibrating Earth's surface like the skin of a drum and sending low-frequency sound waves into the sky.

The tremendous shaking from Japan's Tohoku earthquake in 2011, the fourth-biggest temblor on record, was so powerful the sound traveled into space, a new study reports.

The acoustic waves, called infrasound, jiggled the European Space Agency's GOCE satellite, which measures tiny variations in Earth's gravity field. The satellite was designed to maintain an ultra-stable orbit by automatically adjusting for such variations. Researchers used a computer model to analyze and extract the satellite's response to the infrasound waves and compute their frequency.

The satellite tracked the acoustic waves twice, passing through the atmospheric disturbance over the Pacific Ocean about 30 minutes after the quake and over Europe at about an hour later. The GOCE satellite was 140 miles (225 kilometers) above Earth. This is the first time a satellite has directly recorded infrasound in space, the European Space Agency said in a statement. The findings will appear in an upcoming issue of the journal Geophysical Research Letters. [See how the satellite tracked the infrasound.]

"Seismologists are particularly excited by this discovery because they were virtually the only Earth scientists without a space-based instrument directly comparable to those deployed on the ground," Raphael Garcia, lead study author, said in a statement. "With this new tool, they can start to look up into space to understand what is going on under their feet," said Garcia, a physicist with the Research Institute in Astrophysics and Planetology in France.

For decades, ground-based and underwater infrasound detectors have tracked the deep resonance for research and for the Comprehensive Nuclear-Test-Ban Treaty Organization. Earthquakes, bomb explosions and even meteors shattering in the sky can send acoustic ripples through the atmosphere.The Tohoku earthquake's sound waves were also recorded by ground-based infrasound networks.