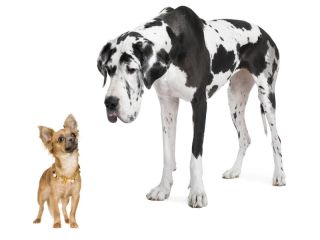 These new findings could help unravel the biological links between growth and mortality, the scientists added.

Normally, across species, larger mammals live longer than their smaller counterparts; for instance, elephants can get up to 70 years old in the wild, while house mice reach only 4 years. Puzzlingly, within species, the opposite seems true — in mice, horses and perhaps even humans.

The apparent cost of bigger bodies is especially conspicuous with dogs, a species that people have bred over the millennia to come in an extraordinary range of sizes. The heaviest known dog may have been Zorba, an English mastiff that weighed 343 pounds (155 kilograms), while the smallest dog alive may be Meyzi, a terrier less than a quarter-pound (110 grams) in size.

Large breeds often die young compared with smaller ones, with a 155-pound (70-kg) Great Dane having an average life span of about 7 years, while a 9-pound (4-kg) toy poodle can expect to live up to 14 years. [The 10 Most Popular Dog Breeds]

To shed light on the possible tradeoffs of large size, researchers analyzed ages at death in 74 breeds, using data from more than 56,000 dogs that visited veterinary teaching hospitals. The researchers focused on why large dogs lived shorter lives on average.

"My main scientific interest is life-history evolution. I'm also a bit of a dog nerd in private life," said researcher Cornelia Kraus, an evolutionary biologist at the University of Göttingen in Germany.

The scientists found that large breeds apparently aged at faster rates; the speed at which the risk of death increased with age was greater with larger breeds than smaller ones. Indeed, among dog breeds, an increase of 4.4 pounds (2 kg) in body mass leads to a loss of approximately 1 month of life expectancy.

The investigators now want to follow the growth and health histories of a large number of dogs and pinpoint the leading causes of death for large dogs. For instance, bigger canines apparently suffer from cancer more often, which could make sense; large dogs grow more than smaller breeds do, and cancer is rooted in abnormal cell growth.

"This research should be feasible in dogs, since I found that dog people in general seem very open, interested in and interested to contribute to research on their favorite species," Kraus said.

Kraus and her colleagues Samuel Pavard and Daniel Promislow detailed their findings in the April issue of the journal American Naturalist.