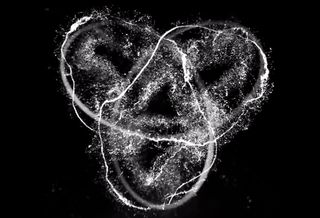 A century-old physics question had scientists and mathematicians in knots, until two researchers at the University of Chicago annihilated them.

Dustin Kleckner, a postdoctoral scientist, and William Irvine, an assistant professor of physics, used a tank of fluid to generate a vortex loop, a structure similar to a smoke ring. Vortex loops are common phenomena, showing up in not only smoke rings but mushroom clouds, fire-eater tricks, and even the sun's outer atmosphere, the corona.

A big question was what happens to these loops over time. The mathematical theories worked out over a century ago by William Thomson, more commonly known as Lord Kelvin, suggested the vortex rings could form knots, and that those knots would be conserved, meaning they'd persist indefinitely.

But Kleckner and Irvine found that they are not conserved. The vortex rings, which spin about their axis or vortex line, can connect, tangle up, and annihilate each other, the researchers found. [See Images of the Vortex Knots]

Mathematically speaking, a knot is a shape that doesn't cross itself unless projected onto another surface. So for example, a trefoil knot (popular on Celtic-themed jewelry) crosses itself when looked at as a two-dimensional picture, but if one follows the rope that makes the knot, it doesn't. That is, while the knots might form all kinds of shapes, if you were following the "rope" formed by the vortex ring, it would never touch itself.

"The basic idea was that if you have a vortex like this, and a principle vortex line, it should not be able to cross itself," Kleckner told LiveScience. When they don't cross, the knot stays intact.

The mathematics may sound abstruse, but they can be tested experimentally. Kleckner and Irvine's setup represented the first time anyone has been able to form knots in a fluid, rather than simple rings, to test Kelvin's theory.

The researchers knew the knots they formed wouldn't be conserved indefinitely, because real fluids have viscosity, or become turbulent, or have friction with the sides of the container — just as trajectories don't behave perfectly according to Newton's laws because of factors such as air resistance. But Kleckner and Irvine thought it would still be useful to check the theory against an experiment.

So the two tried to find a way to generate the vortices. It was harder than it sounded. The problem was getting the fluid (water, in this case) to flow over a structure in just the right way to make the vortex. The two turned to hydrofoils, which are the wings used in watercraft.

To make the vortex, the scientists took the wing-shaped hydrofoil and made it into a ring. They then pushed it through the water. It's not unlike blowing a smoke ring, but in that case it's about getting the puff of air right, Kleckner said. In this experiment, the challenge was getting water to make just the right shape as it is blasted out at high speed.

That took a lot of work with a 3-D printer and some heavy-duty mathematical modeling. After trying some 30 different shapes, the researchers found one that worked. When the water is pushed out with a force equivalent to 100 times the acceleration of gravity, it forms the vortex rings, which connect up to each other and annihilate themselves. The same would likely happen in other media, Kleckner said, as long as one remains well below the speed of sound in the fluid.

The researchers plan to scale up their experiment, to see if making bigger vortices makes them more stable.

Kleckner said that the experiment raises as many questions as it answers. "If these things do exist [in nature], are they important in turbulence? How is this connected to the corona of the sun — that goes through a similar reconnection process," he said. "No one has been able to do experiments like this before."

The research is detailed in the March 3 issue of the journal Nature Physics.