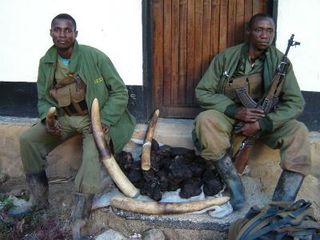 The Okapi Faunal Reserve was thought to be a safe haven for forest elephants in the otherwise conflict-stricken eastern region of the Democratic Republic of Congo. But a new report finds that unabated poaching has sent the population into serious decline. Just 1,700 elephants are left inside the reserve, and that number could be zero within 10 years, conservationists warn.

A lucrative black-market trade in ivory drives the hunt for elephants in the region. In the last 15 years, 75 percent of the Okapi population, or 5,100 animals, have been killed, and in the last five years, the population has declined 37 percent, according to a Wildlife Conservation Society's (WCS) survey.

WCS officials say the numbers are surprisingly grim because the Okapi Faunal Reserve, a UNESCO World Heritage Site covering more than 5,000 square miles (14,000 square km), is considered the best protected conservation area in the Democratic Republic of Congo. Before a civil war broke out in the region in the late 1990s, the WCS counted about 6,800 forest elephants in the reserve. In 2007, after the war officially ended, the WCS's elephant count was down to 2,700.

Since then, park rangers have reduced the number of elephants killed in the reserve each year from 400 to 170, but conservationists warn that instability in the Ituri region could spell more trouble for the animals. In one unsettling incident last June, armed attackers descended on the park headquarters, killing park rangers and villagers and looting the park's offices before setting them ablaze. [Elephant Images: The Biggest Beasts on Land]

The WCS says it's working with the country's wildlife department (the Institut Congolais pour la Conservation de la Nature, or ICCN) to keep the reserve secure.

"We salute our partners at ICCN for their dedication and commitment to protect wildlife under the most difficult circumstances," James Deutsch, executive director for the WCS's African programs, said in a statement. "We remain stalwart in our partnership with them and will continue to work in their country to protect elephants and the landscapes where they live. We urge the international community to support the DRC in the fight against the threat of extinction of the forest elephant."

On the other end of the ivory trade, the WCS says more work is needed to plug the demand for ivory, especially in East Asian countries like China.

The forest elephant is a subspecies of the African elephant, which is listed as vulnerable by the International Union for Conservation of Nature (IUCN). In addition to poaching, the massive mammals are threatened by habitat loss and fragmentation.