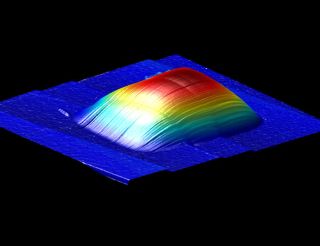 Scientists have developed the world's thinnest balloon that is impermeable to even the smallest gas molecules. Above is a multi-layer graphene membrane that could be used in various applications, including filters and sensors.
(Image: © Jonathan Alden)

Scientists have created the world's thinnest balloon, made of a single layer of carbon just one atom thick.

The fabric that the balloon is made of is leakproof to even the tiniest airborne molecules. It could find use in "aquariums" smaller than a red blood cell, through which scientists could peer at molecules, researchers suggested.

The balloon is made of graphite, as found in pencils, which is made of atom-thin sheets of carbon stacked on top of each other known. The sheets are known as graphene.

Graphene is highly electrically conductive, and scientists are feverishly researching whether it could find use in advanced circuitry and other devices.

"We were studying little graphene trampolines, and by complete accident, we made a graphene sheet over a hole. Then we started studying it, and saw that it was trapping gas inside," said researcher Paul McEuen, a physicist at Cornell University in Ithaca, N.Y.

By experimenting further with bubbles made of graphene, McEuen and his colleagues found the membranes were impermeable to even the smallest gas molecules, including helium.

"It's amazing that something only an atom thick can be an impenetrable barrier. You can have gas on one side and vacuum or liquid on the other, and with a wall only one atom thick, nothing would go through it," McEuen told LiveScience.

In terms of applications, McEuen suggested one possibility which he called miniature aquariums for molecules. "You could have instruments on one side of the membrane, in vacuum or air, and on the other side you would have DNA or proteins suspended in liquid," he explained. "And then you could get right up close to image the molecules, within a few angstroms," or widths of an atom.

Other potential applications include hyper-fine sensors and ultra-pure filters.

The only way gas leaked out from inside the balloons was through the glass that the bubbles were anchored on, McEuen explained.

"We need to build a better base that's more impenetrable, such as single crystal silicon. I'm confident we can make a leakproof version," McEuen said.

The scientists will detail their findings in the Aug. 13 issue of the journal Nano Letters.