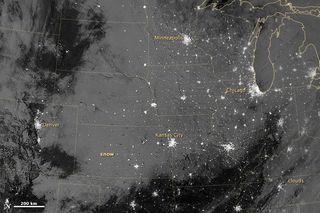 This image, taken by the Suomi NPP satellite on Feb. 23, shows light reflected by snow that fell in the days prior.
(Image: © NASA Earth Observatory)

The blizzard that pounded the southern Plains states yesterday (Feb. 25) added to the dumping the area received just days ago and has broken the all-time monthly snowfall record for Wichita, Kan.

Yesterday's storm dropped nearly 7 inches (17.8 centimeters) of snow on that city, bringing the monthly total to 21 inches (53 cm) — the most snow the city has seen in any month since records have been kept, according to the National Weather Service.

Though the record is for the month, all the snow has actually fallen since Feb. 20, dropped by the two large storm systems that have hit the region in less than a week, the NWS reported.

The low-pressure system also dropped a record amount of snow in Texas, accumulating up to 17 inches (43 cm) in Amarillo. Yesterday morning, the Amarillo International Airport recorded a hurricane-force 75-mph (121 kph) gust of wind. In Oklahoma, a state of emergency was declared for 56 of 77 counties, according to Reuters. [Intense Texas Blizzard Caught in Videos]

And the snow hasn't completely stopped. Flurries are possible throughout the day today (Feb. 26), so that total snowfall in Wichita may climb further. The same system is expected to hit Chicago and Detroit by this evening, perhaps bringing as much as 6 inches (15 cm) of snow to those locales, just in time to snarl rush-hour traffic, according to the NWS.

At least three deaths have been blamed on the storm, which has created hazardous driving conditions, the Associated Press reported. Wind gusts of up to 30 mph (48 kph) have created drifts up to 2 feet (61 cm) high throughout the region, reducing the visibility to nearly zero in some areas, the AP said.

Throughout the region, there were several reports of thundersnow.