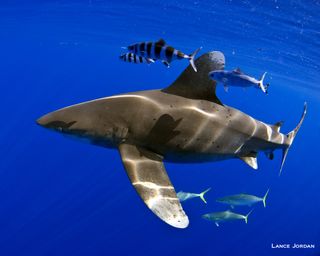 Whitetip sharks, once one of the most abundant apex predators on the planet, have become critically endangered in parts of the Atlantic ocean due to overfishing.
(Image: © Lance Jordan, Microwave Telemetry, Inc.)

Whitetip sharks may travel up to 1,200 miles (1,931 kilometers) during jaunts from their homes in the Bahamas, according to new research.

The data, which came from tracking sharks with satellite tags, revealed that the fish routinely cross international boundaries, which could make country-based conservation programs less effective.

"Although these sharks are relatively safe from fishing in Bahamian waters, our study shows their long-range roaming takes them across the boundaries of different countries and into the high seas where they still encounter fishing gear set for other species," said study author Demian Chapman, a marine biologist at Stony Brook University, in a statement.

The findings were published online today (Feb. 20) in the journal PLOS ONE.

Little is known about the elusive whitetip sharks, because they spend a lot of time out in the open ocean. Though these top predators once filled the oceans, because of overfishing the sharks are now listed as a critically endangered species in the Northwest Atlantic and Western Central Atlantic Oceans, and vulnerable around the world by the International Union for the Conservation of Nature. [On the Brink: A Gallery of Wild Sharks]

To track the sharks' roaming patterns, Chapman and his colleagues attached pop-up satellite tags to 10 female and one male shark off Cat Island in the Bahamas.

The tags tracked 245 days of the sharks' adventures, recording water temperature, depth and location data. Afterwards, the tags detached automatically and sent their data to satellites.

While three of the sharks kept close to the Bahamas area for the entire duration of the study, another five roamed far outside the Bahamas' jurisdiction, with one making it as far as Bermuda. Overall, the sharks spent more than two-thirds of their time around the Bahamas.

In addition, the tags revealed that these sea creatures made deep dives of around 3,280 feet (1,000 meters).

The sharks' long-distance voyages suggest that conservation efforts for the sharks could be more global in scope. The Bahamas bans fishing of the sharks in its surrounding waters, but other countries have no such bans.

"If we want to continue to see these animals in our oceans, fishing nations will have to work together to protect this species, and monitoring of trade and enforcement measures will need to be coordinated on an international level," Chapman said in a statement.