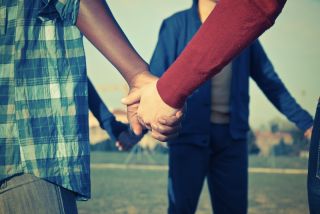 Researchers are becoming increasingly interested in studying polyamory, in which people make commitments to multiple romantic partners at once, with the full consent of everyone involved.
(Image: © William Perugini, Shutterstock)

On Valentine's Day, images of couples are everywhere. They're buying each other diamond rings, making eyes over expensive restaurant meals and canoodling over chocolate-covered strawberries and champagne. But two-by-two isn't the only way to go through life. In fact, an estimated 4 to 5 percent of Americans are looking outside their relationship for love and sex — with their partner's full permission.

These consensually nonmonogamous relationships, as they're called, don't conform to the cultural norm of a handholding couple in love for life. They come in a dizzying array of forms, from occasional "swinging" and open relationships to long-term commitments among multiple people. Now, social scientists embarking on brand-new research into these types of relationships are finding that they may challenge the ways we think of jealousy, commitment and love. They may even change monogamy for the better.

"People in these relationships really communicate. They communicate to death," said Bjarne Holmes, a psychologist at Champlain College in Vermont. All of that negotiation may hold a lesson for the monogamously inclined, Holmes told LiveScience.

"They are potentially doing quite a lot of things that could turn out to be things that if people who are practicing monogamy did more of, their relationships would actually be better off," Holmes said. [6 Scientific Tips for a Successful Marriage]

The study of consensual nonmonogamy is a relatively new field. In the 1970s, partner-swapping and swinging (recreational sex outside of a relationship) came into the public eye, and psychologists conducted a few studies. But that research was limited to mostly white, heterosexual couples who engaged in swinging for fun, according to Elisabeth Sheff, a legal consultant and former Georgia State University professor, writing in 2011 in the Journal of Contemporary Ethnography.

That means little is yet known about who participates in consensual nonmonogamy and why. Research is largely limited to self-report and surveys, in which people can be tempted to present themselves in a positive light. There are, however, some key definitions to understand. Consensual nonmonogamy contains multitudes. It includes sex-only arrangements, such as two committed partners agreeing that they're allowed to seek no-strings-attached sex with other people. It also includes polyamory, which involves multiple committed relationships at once with the consent and knowledge of everyone involved.

Consensual nonmonogamy does not include cheating, in which one partner steps out without the permission of the other.

While there are no national statistics on consensual nonmonogamy, University of Michigan psychologist Terri Conley has estimated that about 5 percent of Americans are in one of these types of relationships at any given time. From the little data collected, scientists know lesbian, gay and bisexual individuals are slightly more likely than heterosexuals to enter nonmonogamous relationships, said Amy Moors, a graduate student in Conley's lab. So, it seems, are people high in the personality trait of openness, which indicates high interest in new experiences.

So far, studies suggest that polyamorous individuals are well-educated, holding more master's and doctoral degrees than the general population, said Champlain's Holmes, who is conducting ongoing research of an online sample of more than 5,000 polyamorous individuals. Despite their smarts, they're not particularly wealthy. [5 Myths About Polyamory]

"That tells me that it's probably people who are often more focused on experiences in life," than money, Holmes said.

Would you ever have a polyamorous relationship?

One thing that seems to unite the polyamorous community is a real enthusiasm for digging into emotions. Honesty, openness and communication are cornerstones for polyamorous relationships, Holmes has found.

It's this intensive conversation that might be wise for monogamous couples to emulate, Holmes said. His work also suggests that basic emotions work very differently in polyamorous relationships.

Take jealousy. If you ask most people how they'd feel if their partner had sex with or fell in love with someone else, the responses would be pretty negative: fear, anger, jealousy, rejection. Ask a polyamorous person the same question, and they're more likely to tell you they'd be thrilled. It's a concept called "compersion," which means the joy felt when a partner discovers love outside of you. It's similar to the feeling the typical person might get after finding out their best friend scored her dream job, Holmes said. But in this case, the happiness stems from a lover's external relationships.

That finding challenges much of what traditional psychological research has established about how jealousy works.

"It turns out that, hey, people are not reacting with jealousy when their partner is flirting with someone else," Holmes said. "Good science tests theories and predictions … you need to see if it holds up even in extreme situations."

In another example of polyamorous people potentially turning typical psychological reactions upside-down, Holmes conducted a preliminary analysis of about 200 polyamorous people, asking them about feelings of jealousy. Typically, he said, you'd expect to see that women are more anxious about emotional infidelity, while men worry more about sexual infidelity. That wasn't the case among the polyamorous individuals. In fact, there were no gender differences in rates of sexual and emotional jealousy to be found.

None of this suggests that polyamorous people are somehow immune to jealousy, Holmes said. But when jealously does occur, it's discussed. The person feeling jealous is encouraged to examine their own psyche to find out what's bothering them and which of their needs aren't being met. Then the pair (or triad, or quad) can negotiate boundaries.

Holmes is careful to say he's not advocating any particular relationship structure. But in some cases, consensual nonmonogamy may be a more responsible choice — at least if monogamy is proving too tough.

The University of Michigan's Moors has found that people who cheat on their partners sexually are less likely to engage in safe sex while doing so than are people in consensual nonmonogamous relationships. The findings, published in March 2012 in the Journal of Sexual Medicine, apply to condom use, use of gloves for genital touching, discussion of sexually transmitted disease and sexual history and sterilization of sex toys. [50 Sultry Facts About Sex]

"Individuals in consensually nonmonogamous relationships were just safer across the board," Moors told LiveScience. A second study, to be published in a forthcoming issue of the Journal of Sexual Health, found that individuals who had permission to "cheat" were more likely to use condoms correctly than actual cheaters.

Part of the reason for the difference may be that consensually nonmonogamous people often explicitly stipulate that outside sex is okay, as long as it is safe. Cheaters were also more likely than consensually nonmonogamous people to be drunk or on drugs during their outside encounters. Finally, skipping safe sex may be a way for cheaters to rationalize their behavior, Moors said.

"If they had gone out and gotten protection then it might have seemed more planned," she said. "It might have been like, 'Maybe I shouldn't be cheating on my partner if I have to walk to CVS to pick up condoms.'"

There are many open questions left about polyamory and other nonmonogamous arrangements, but research is picking up, Holmes said. This weekend, the first International Academic Polyamory Conference is being held in Berkeley, Calif. The Internet has likely boosted interest in polyamory, said Sheff, who is working on a book about polyamorous families.

Polyamory is complex enough and time-consuming enough that it will likely never overshadow serial monogamy, Sheff said. Nonexclusive hook-up culture has young people negotiating consensual nonmonogamy like never before, she said, and people are increasingly thinking of relationships as build-it-yourself rather than prepackaged.

"I think polyamory will co-exist as a less popular option" than monogamy, Sheff said. "Or people will phase in and out of it at different times in their lives."