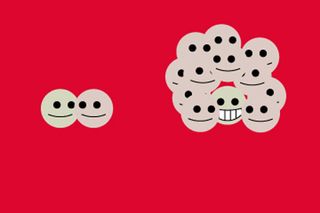 A study of mating behavior shows that while most of us have had one sex partner in the past five years, some of us have had 10, 20 or even more.
(Image: © Karl Tate, LiveScience.com Contributor)

Why some people are more promiscuous than others is still a mystery. Even so, the mating strategy a person chooses — whether settling down with a long-term mate or just flying in for an evening — reveals much about that person as well as society, research has shown.

Some people prefer to have long-term sexual relationships with a single partner. In rare cases, that can mean one partner for life. Other individuals, not finding fulfillment in monogamous lifestyles, incessantly seek out new partners. At this opposite extreme are the likes of basketball player Wilt Chamberlain, who claimed to have slept with 20,000 women.

Most people, however, accumulate several partners over our lives in between periods of "settling down." Guys and gals struggle with the contrary instinctual urges to mate often or to secure a quality mate. Social mores, meanwhile, aim to lessen the strife that can result from unchecked sexuality.

"Without trying to simplify a complex situation too much, there's a basic tension between biology on one side and society on the other side," said psychologist Tom W. Smith. "Biology simply wants a male and a female to mate together and the female to become pregnant — that’s all biology wants. But societies want to perpetuate themselves, too."

Smith is director and principal investigator of the widely cited General Social Survey (GSS) conducted by the National Opinion Research Center at the University of Chicago, which gauges sexual attitudes and behaviors.

Battle of the sexes

Men and women start and stop relationships for various reasons. From a biological perspective of passing genes on to the next generation, human males and females, however, appear to be at cross-purposes when it comes to sex. [6 (Other) Great Things Sex Can Do For You]

"The amount of children that can be produced by a woman is much more limited than [the number] a man can father," said Smith. "If she has 100 partners, it's not going to dramatically increase the number of children she has."

Usually no more than one egg at a time is available in a woman's uterus for fertilization. A resulting pregnancy lasts nine months, during which time sex cannot yield more children. In contrast, males can ejaculate repeated loads of millions of sperm cells in a given day, any one of which can make a child.

A woman also has to invest far more in her child than the father does. "Basically in every society, the prime parenting responsibilities are put on the mother, most obviously with nursing," Smith said. "Before animal milk was supplied in place of human milk, it was absolutely essential to have a nursing mother for a child."

Women have often sought a support system for them and their young. "Having a faithful spouse is one way, or a sisterhood of relatives, and many societies do both," Smith said.

The proverbial ball and chain

Keeping couples faithful is at the root of many societal laws and customs that attempt to promote childrearing while curbing sexual desire.

"You have all these formal and informal things trying to keep this strong natural force under control, because society learned way back before in prehistory that this was something they needed to regulate or it caused all kinds of problems," Smith said.

He gave examples of "jealous spouses and cuckolded husbands," as well as "fathers who did not believe they were the parent of their partner's child and wanted to kill that offspring." Such situations did not benefit tribes or larger societal organizations. "There's no such thing as a 'free love society,'" Smith said. "There is no primitive or tribal society that doesn't have rules. Some have fairly loose rules, but most have developed strict rules. They find it's best for perpetuation of the society."

Therefore, adultery — the breaking of sexual exclusivity — has long been viewed as a moral wrong. Throughout much of history, adultery even stood as a legal wrong in accordance with major religions, Smith noted.

Your lawful husband or wife

Marriage, then, has unsurprisingly emerged as a global practice. Usually by definition, a marriage between two partners entails monogamy. When someone has multiple marriages, the parental lines of responsibility tend to be kept clear, even in polygamous "harems" — one (usually prosperous) man with many spouses. [Marriage & Divorce Statistics (Infographic)]

Yet "cheating" does occur. According to the best estimates available from studies, Smith noted that 3 percent to 4 percent of currently married people in the United States have a sexual partner besides their spouse in a given year. Overall, about 15 percent to 18 percent of ever-married people have had a sexual partner other than their spouse while married. [How to Tell If Your Partner Is Cheating]

"This [statistical information] does support the idea that infidelity is not epidemic," Smith said, despite how frequently affairs are made to seem in pop culture.

But the tabloids do seem to have one thing right: Men do cheat more than women, at a rate of about two to one, according to the GSS. This infidelity aligns with the biological arguments of men wanting to sow their seed, while women want better potential fathers and providers.

Notches on the belt

In recent decades, marriage as an institution has declined, while premarital sexual activity and the age when one enters into a first marriage have increased, studies show. Sociologists offer a number of societal reasons, from the "sexual revolution" of the 1960s to modern technologies such as the Internet opening up broader avenues of sexual selection and temptation.

Taken together, people on average now have more partners between the sheets than they used to. GSS statistics starting back in 1989 show an average of seven partners in an adult's lifetime, trending to about nine by 2002. Another way of looking at adults' single- or multi-partner-oriented lifestyles is revealed by the number of sexual partners over a five-year span.

Sex often brings with it confusion about what the partner ultimately seeks in terms of a relationship. "A sexual encounter occurs, and one partner assumes it has meaning and endurance and the other partner never assumed that from the beginning," Smith said.

But even confirmed bachelors or purposefully single women can have their ways changed. After all, this month, notorious British gigolo Russell Brand celebrates his one-year wedding anniversary to the pop singer Katy Perry.