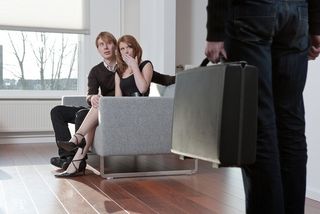 What would you do if you found out your partner had cheated?
(Image: © © Lucubaghs | Dreamstime.com)

After finding out that their partner has been seeing someone else, what aspect of the infidelity bothers men and women the most? A reality TV show that captures actual infidelities on video suggests the answer. Apparently a man will ask a woman if she had sex with the other man, whereas a woman will ask a man if he loved the other woman.

New research  based on the TV show "Cheaters" is the first to reveal gender differences in real-life examples of romantic jealousy. Its findings could shed light on how our psychology evolved.

Scientists have long suggested that men and women tend to react differently to adultery, with men caring more about sexual infidelity and women about emotional infidelity. The widespread explanation for this is centered on the evolutionary drives to have offspring and ensure their survival: Men want kids whom they know are their own, and women don't want a mate's care diverted to rivals.

Past studies of gender differences in jealousy, however, have been subject to one key criticism: They generally asked people what kind of past unfaithfulness was most distressing, or what might be most upsetting about a future act of cheating. Any conclusions were thus based on participants' memory and imagination, not actuality.

Enter "Cheaters," which aims to chronicle real-life love triangles involving victims, cheaters and interlopers. On the show, victims contact the "Cheaters Detective Agency" with their suspicions, investigators clandestinely uncover evidence of infidelity, and producers record jealousy-fueled interrogations of cheaters by victims. The show has been on the air since 2000 and in national syndication since 2004.

Before the TV show, it was a movie that inspired researcher Barry Kuhle.

"I've had a long-standing interest in the nature of jealousy, but watching the movie 'Closer' sparked an interest in sex differences in jealous interrogations," explainedKuhle, an evolutionary psychologist at the University of Scranton in Pennsylvania. "Closer" was a 2004 film based on a stage play about a love triangle. It starred Clive Owen, Julia Roberts, Natalie Portman and Jude Law.

Kuhle added: "During a pivotal, tough-to-watch scene, Clive Owen's character interrogates Julia Roberts' character Anna about the nature of her infidelity, and his grilling centers on sex. He bombards her with a barrage of questions about the frequency, timing, whereabouts, type, quality and orgasmic nature of the sex she had with the interloper. Befuddled by the sexually obsessed nature of the interrogation, Anna asks, 'God, why is the sex so important?'"

'Did you have sex with him?'

"The emotion of jealousy shows clear evidence of evolution's fingerprints," Kuhle told LiveScience. "Natural selection has designed men to be acutely sensitive to being cuckolded and women to losing their partner's time, attention and resources. Our skulls house a Stone Age mind in a modern-day world."

"Actual jealous behavior from men and women who have actually been cheated on conforms to evolutionary psychological expectations and dovetails perfectly with research done previously that asked people to anticipate how they would behave in these circumstances," Kuhle said.

Men are from Mars

Kuhle cautioned these findings showed only a tendency for differences between the sexes. "Every man and every woman did not conform to this pattern," he said.

One concern regarding this work is whether the televised instances of infidelity were staged or not. Still, Kuhle argued it is unlikely that most of the show's 400 to 450 love triangles were staged. He added that studies of this kind might be one of the only ways to observe actual jealous behavior in the face of actual infidelity. After all, it should go without saying that "it would be unethical and impractical to design a true experiment in which researchers hired confederates to sleep with participants' partners and then observed the participants' upset at and interrogations of their partners," Kuhle said.

The scientists detailed their findings online Aug. 26 in the journal Personality and Individual Differences.