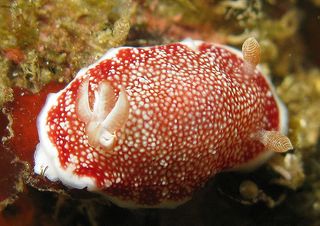 The sea slug Chromodoris reticulata sports a disposable penis that lies coiled up inside its body, ready to shed after each copulation.
(Image: © Steve Childs | Flickr.com)

A bizarre, hermaphrodite sea slug may give new meaning to the word "quickie." The nudibranch uses a disposable penis to have sex more frequently, according to a new study.

The animal, described today (Feb. 12) in the journal Biology Letters, is the first discovered to use an easily regenerated, disposable penis.

Nudibranches are simultaneous hermaphrodites, meaning that they have penises that they use to fertilize others as well as female sex organs. But exactly how their sex worked remained a mystery.

To find out, Ayami Sekizawa, a biologist at Osaka City University, and his colleagues collected specimens of the nudibranch Chromodoris reticulata while scuba diving off Okinawa, Japan. They then put 31 pairs of the creatures together in an aquarium and watched as they mated. [The Animal Sex Quiz]

When the sea creatures copulated, they unfurled part of a long penis coiled up like a fire hose inside their bodies. The creatures then simultaneously penetrated one another with their penises (which are covered in backward-pointed spines), and after tens of seconds to a few minutes of sea slug sex, separated.

The slugs then discarded the penises (or at least the extended portion of them), similar to how geckos shed their tails. After about a day, the nudibranches were ready to mate again, at which point they projected the penis section that was previously hidden internally. One frisky slug actually had sex three times in three days. After the slugs finished with sex, and their cast-off penises, the spiral portion of the penis forms more cells that will eventually grow into the next penis, the researchers hypothesize.

Because the sea creatures often live in dense groups where sexual competition is fierce, the findings suggest that the use of the coiled, compressed penis can give nudibranches a leg up by allowing them to have sex more frequently, the researchers write in the paper.

Having a disposable penis may also enable nudibranches to scrape out rivals' sperm while sidestepping the difficult removal of a penis covered in backward-pointed spines from their partners.

"Chromodoris reticulata may compensate for the short-term cost of decreased reproductive opportunities caused by the loss of a penis with the reproductive advantage gained by sperm displacement under severe sperm competition," the authors write.