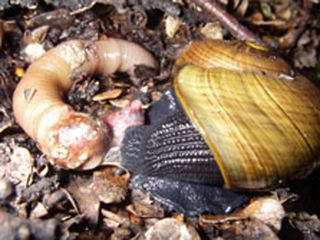 The endangered powelliphanta snails eat worms and slugs and can grow to be as big as a man's fist.
(Image: © doc.govt.nz)

Giant carnivorous hermaphrodite snails are on the rise in New Zealand, according to a recent wildlife conservation survey. Officially listed as endangered in the country, powelliphanta snails can grow as big as a man's fist.

A recent survey by New Zealand's Department of Conservation (DOC) revealed that the snail population in Hawke's Bay, New Zealand, has increased since the last survey was conducted six years ago. During the 2011 survey, researchers found 75 live snails, compared with 51 live snails from the 2005 survey.

"Powelliphanta are one of our most amazing native invertebrates," DOC ranger Mark Melville told The Dominion Post. "They are carnivores, giants of the snail world. They can live up to 20 years and they lay eggs that look like small birds' eggs."

The snails dwell on damp forest floors and forage for food at night. They mainly prey on earthworms but are also known to eat slugs, using a row of sharp, backward-facing teeth to grab their prey before devouring it using digestive enzymes. [Read: Why the Full Moon Makes Scorpions Glow in the Dark]

Like some other land and freshwater snail species, powelliphanta snails are hermaphrodites. This means that any adult can mate with any other adult because both female and male sexual organs are present in each snail.

The snails' endangered status stems from the destruction of their habitats and being preyed upon by animals such as possums, pigs and rats. The DOC's conservation efforts, including protecting the snails' territory in Hawke's Bay, have helped to bring their numbers back up.

This story was provided by Life's Little Mysteries, a sister site to LiveScience. Follow Remy Melina on Twitter @RemyMelina.