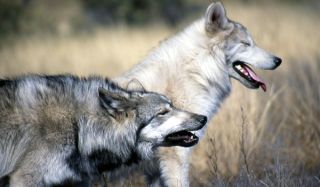 There are many theories on how dogs evolved as a species, including the view that they are mixed descendants of two or more wild species, such as wolves, dingoes and jackals.
(Image: © masonjar | sxc.hu)

After being hunted to near-extinction, wolves in the northern Rocky Mountains have made a remarkable recovery in the past 15 years with successful protection and management protocols enacted under the Endangered Species Act. On Thursday, a policy rider attached to the budget bill "delisted" the species in the region, removing its endangered species status.

Following close on the heels of that legislation, which marked the first time Congress has ever stripped a species' federal protection, the U.S. Fish and Wildlife Service (USFWS) decided to delist gray wolves in the Western Great Lakes region as well.

The USFWS said the Western Great Lakes sub-population has recovered to the point where it is no longer in danger of extinction. "Wolf populations have met recovery goals and no longer need the protection of the Endangered Species Act," the agency said in a statement.

By the end of 2010, according to the USFWS, wolves numbered at least 1,651 living in 244 packs in Montana, Idaho, Wyoming, Oregon, and Utah - all of which descend from a group of 66 wolves introduced into Yellowstone National Park in 1994, where they had been extinct since the 1930s. About 4,000 wolves roam Michigan, Minnesota and Wisconsin.

Wolf management in the northern Rockies and the western Great Lakes regions have now become a responsibility of the states. "We believe transferring management of wolves to the state will allow better control of the population, especially problem animals, and will provide needed protections for livestock and pet owners," Wisconsin governor Scott Walker wrote in a letter.

In the past, livestock depredation was one of the primary reasons for hunting wolves, which may sometimes become addicted to the higher fat content of livestock as compared to wild herbivores such as elk. They have also been known to attack dogs, which they view as competitors . Hunting wolves is forbidden under Endangered Species Act protections, except in rare cases when culling is necessary.

Some states will continue to protect their small wolf populations while others plan to allow hunting. Idaho and Montana, for example, are already planning public wolf hunts this fall, according to the Associated Press.

"What Congress has done today ... is unforgiveable and marks a low point in the recent history of wildlife conservation," Rodger Schlickeisen, president of Defenders of Wildlife, said on Thursday. "Never before has Congress stripped Endangered Species Act protections for one particular species, putting politics above sound science and our national commitment to conserving America's wildlife."