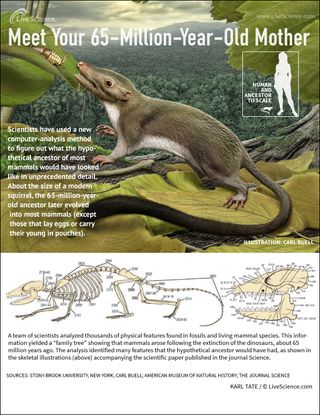 This tiny squirrel-sized creature would later evolve into a diversity of mammal species including humans.
(Image: © Karl Tate, Livescience.com contributor)

Scientists have used a new computer-analysis method to figure out in unprecedented detail what the hypothetical ancestor of most mammals would have looked like. About the size of a modern squirrel, the 65-million-year-old ancestor later evolved into most mammals (except those that lay eggs or carry their young in pouches).

A team of scientists analyzed thousands of physical features found in fossils and living mammal species. This information yielded a “family tree” showing that mammals arose following the extinction of the dinosaurs, about 65 million years ago. The study was so detailed, even tiny details were revealed such as the shape of the brain and inner ear bones.

The ancestor would later evolve into all placental mammals. These are the mammals that keep their fetus alive with a placenta, as opposed to those who develop their young in pouches or in eggs.

The study showed that the ancestor probably existed about 200,000 to 400,000 years following the event that caused the extinction of non-avian dinosaurs, about 65 million years before today.

The team of scientists used a computer program called MorphoBank to generate about 2,500 anatomical characteristics, or “characters,” to describe the ancient animal. Members of the team located all over the globe collaborated through a website to combine both DNA and morphological data.