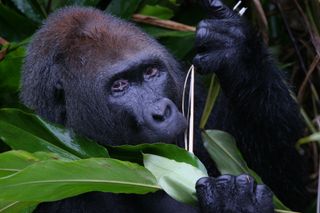 A western lowland gorilla, a critically endangered species that will be protected in a new national park in the Republic of Congo.
(Image: © Thomas Breuer/Wildlife Conservation Society-Max Planck Institute for Evolutionary Anthropology)

The Republic of Congo has declared a new national park that conservationists hope with protect a core population of western lowland gorillas, a critically endangered species, as well as other threatened species, the Wildlife Conservation Society announced today (Jan. 31).

The WCS discovered a population of 125,000 western lowland gorillas in the northern part of Congo in 2008. After the discovery, the Congolese government pledged to protect the area with a national park, the WCS said in a statement.

The Ntokou-Pikounda National Park was finally created by the government on Dec. 28, 2012. It covers an area of 1,765 square miles (4,572 square kilometers) and includes about 15,000 gorillas, 8,000 elephants and 950 chimpanzees, two other species threatened by human activities, according to the statement.

"The Republic of Congo has shown the world its commitment to protect the largest population of gorillas on the planet," WCS president and CEO Cristián Samper said in the statement. "We commend the Congolese government for its leadership and foresight to set aside lands so that wildlife can flourish."

The new park includes an area named the "Green Abyss" by WCS researchers that has a rich population of gorillas, the WCS said. [Video: Congo western lowland gorillas.]

Gorillas across central Africa, including the western lowland gorillas, face threats from deforestation of their habitat, wars and poachers who hunt them for bushmeat, as well as the spread of the Ebola virus.