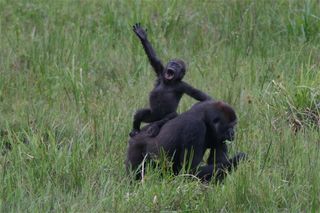 A new tally of lowland gorillas has found massive and surprising numbers of these African primates alive and well in the Republic of Congo, Wildlife Conservation Society scientists announced.

The new census puts the number of western lowland gorillas (called great apes, along with chimpanzees, bonobos and orangutans) within two adjacent areas in the northern part of the Congo at 125,000 individuals, including infant gorillas. The results were announced today during a press conference at the International Primatological Society Congress in Edinburgh, Scotland.

Previous estimates from the 1980s placed the entire population of western lowland gorillas, which live in seven Central African nations, at fewer than 100,000 individuals. Since then, scientists thought the number would've at least halved due to hunting and disease.

With partial funding from admission fees to the Bronx Zoo's Congo Gorilla Forest exhibit, WCS researchers combed rainforests and isolated swamps to count gorilla "nests," which gorillas construct out of leaves and branches each night for a sleeping area.

The researchers estimate 73,000 came from the Ntokou-Pikounda region and another 52,000 from the Ndoki-Likouala landscape, which includes a previously unknown population of nearly 6,000 gorillas living in an isolated swamp.

"We knew from our own observations that there were a lot of gorillas out there, but we had no idea there were so many," said Emma Stokes, who led the survey efforts in Ndoki-Likouala. "We hope that the results of this survey will allow us to work with the Congolese government to establish and protect the new Ntokou-Pikounda protected area."

The researchers attribute the high numbers to successful long-term conservation tactics in the area; the remoteness and inaccessibility of the key gorilla hideouts; and a food-rich habitat.

"These figures show that northern Republic of Congo contains the mother lode of gorillas," said Steven E. Sanderson, WCS president and CEO. "It also shows that conservation in the Republic of Congo is working."

For instance, WCS has worked with the Republic of Congo government in the northern area of the country for nearly 20 years. There, the cooperative effort helped to establish the Nouabalé-Ndoki National Park and manage the Lac Tele Community Reserve, while working with logging companies outside of protected areas to reduce illegal hunting.