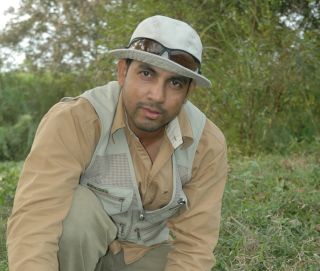 When conservation biologist Firoz Ahmed installs camera traps in Kaziranga National Park, in northeastern India's Assam state, he and his colleagues must return every day to check on the reinforced metal boxes.

Often, the cameras have been torn down and trampled. Because the traps are installed in pairs to capture each side of a passing tiger, Ahmed has photographic evidence.

"We've got kung-fu elephants. They just come and kick our camera traps," Ahmed said. "That's why we go every day, to put the camera in position again. Some camera traps are not touched, and some are every day," Ahmed told OurAmazingPlanet.

Even a heavy steel box weighing 30 pounds (12 kilograms) isn't elephant-proof, because tusks can poke inside a camera lens opening, Ahmed said. "We have to have equipment that can sustain an elephant trampling for an hour," he said. [See images of Ahmed's work.]

Ahmed is a full-time tiger tracker and staff biologist for Aaranyak, a nonprofit organization dedicated to wildlife conservation. He also studies turtles and other reptiles. One of his primary work sites is Kaziranga National Park. The area's rich biodiversity has earned it recognition as a UNESCO World Heritage Site, but northeast India is also home to 40 million people, representing 220 ethnic communities and tribes.

This Q&A was adapted from a talk and subsequent interview with Ahmed at the U.S. Geological Survey's Western Ecological Research Center in Sacramento on Jan. 22.

OurAmazingPlanet: How have camera traps improved our knowledge of tiger populations?

Firoz Ahmed: The stripes of a tiger can never lie. The pugmarks [footprints] can lie. The same individual [tiger] can have different pugmarks. In some places where there were no tigers, [people] made pugmarks out of their own plaster casts.(Personnel were expected to locate tiger tracks and obtain plaster casts or tracings of the pugmarks.) Now they cannot do that, because they have to show tigers from their own camera traps. [Iconic Cats: All 9 Subspecies of Tiger]

OAP: Do tigers try to avoid the cameras?

FA: They recognize the cameras. When we resampled an area, we had less [population] density and we believe it is because they recognized the camera traps. Initially, what we used had a very bad focusing flash, and they figured it out. We're not using those anymore.

They are very cunning, and they know their habitat very well. When we put up a camera, they come and look at it, and they remember that place. They think, "I know there is a camera here and I don't like it." When we go out and monitor our cameras, we see signs of a tiger moving around, then we see them go around the camera, behind the camera, and come out on the road again. So we shift the camera to prevent that. After a week, we shift it 50 meters [165 feet] on one side and 100 meters [325 feet] on the other side.

We have two cameras because both flanks have different patterns.

OAP: You snapped a well-known tiger photograph in Kaziranga in 2010. How did you get the shot?

OAP: How do you navigate through the forest?

FA: We put cameras mostly on the roads and paths, because the tigers don't like to go through the grass. In the grassland, they can't go [through the grass] on their own. The holes that the elephants and the rhinos and the buffalos make, that becomes the highway, and then the other animals follow.

We also carry a laptop into the forest, and I use Google Earth quite a lot because nobody goes there. We know the GPS location to go, but as for how to go there, we use Google Earth, so we don't get lost in the forest.

OAP: What are some of the challenges of working inside Kaziranga, which is a protected preserve?

FA: There is tall grassland, and sometimes we need to walk through because we know there are nice wetlands with herbivores on the other side. We know that if we put a camera trap there, we will get tigers. We always put a camera trap in a place where there is a maximum likelihood of getting a tiger. So, this place has rhinos, more than 2,000 of them, and we always pray in the morning, "I don't want to see a rhino."

OAP: What are some of the threats faced by tigers in India?

FA: This is a human-dominated place. In some places, the population is from 13 to 300 people per square kilometer [0.4 square mile], and there is pressure on the resources because of that. These forests have been opened in a number of places. We are losing these forests at very fast rates.

OAP: What should people in the United States know about tigers in India?

FA: They should know that the tigers are very important. They should know they are disappearing from large tracts of forest in India and other range countries and try to help as much s they can. They can come and contribute on their own and they can come and volunteer, and help local villagers understand the importance of tigers in the area. They can do home-stay instead of staying in big lodge, so money goes to local people directly. And Americans can use less resources.

OAP: What about poachers?

FA: We have a severe problem with poachers. In the last two weeks, we lost four rhinos to poachers, and in the last six months, we lost about 20 rhinos to poachers. We killed only two poachers. The area is not remote, it is in the middle of the state, but it is a fortress. Only poachers go inside. They get killed or they get their animals. The [Assam] Forest Department is allowed to kill them. [Kaziranga has about 2,200 Asiatic one-horned rhinos, India's biggest conservation success story.]

We also got poachers. They killed a rhino on Jan. 14, 2011, and we thought maybe we got them on camera, and we did. So we made this poster, because we had a very good profile picture, and spread it around the park. They confessed to the police, and they went to jail for about three months for illegal arms.

OAP: What do you love about this work?

FA: First of all, this is such an interesting job to do, and every day is a new day in the forest, because you don't know what is there for you, and I love to do new things. Secondly, this is a contribution from my side to the mother earth.That is my motive, and something to the next generation before I leave.

Editor's note: This story was updated to reflect that Aaranyak is not a government organization.