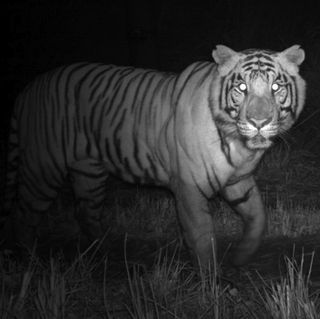 A Bengal tiger caught by a motion-activated camera in Nepal.
(Image: © Neil Carter)

In the forests of Nepal, daytime belongs to humans, but the night is the time of the tigers, a new study finds. The results may reveal how people and predatory cats manage to coexist.

A two-year study of video from more than 70 motion-activated cameras near Chitwan National Park in south-central Nepal finds that endangered tigers aren't necessarily driven from their forest habitats when humans share the same space. Instead, the tigers restrict their usual round-the-clock activity to nighttime.

"This has highly important implications," said study researcher Jianguo Liu, a sustainability researcher at Michigan State University. "In the past, people were always thinking we needed to have tigers and people separate across space. This study indicates they can share the same space."

Chitwan National Park is home to the greatest number of Nepal's tigers, though the big cats are rare: A 2010 survey by the Nepalese government and conservation organizations National Trust for Nature Conservation and WWF-Nepal found that about 125 tigers live in Chitwan and its surrounding areas. Tiger attacks on humans are rare, though a 17-year-old was killed by a tiger in Chitwan in April after going into the park to cut grass.

Bengal tigers (Panthera tigris tigris) are listed as endangered by the International Union for Conservation of Nature. There are likely fewer than 2,000 of these tigers in the wild.

For the most part, Liu said, tigers steer far clear of humans. The camera footage revealed that inside the park, 80 percent of tigers caught on film were roaming at night. Outside the park, that number was 95 percent.

"In other areas, tigers actually have more activity during the day, so that means these tigers are forced to be more active at night due to human activity," Liu told LiveScience.

Liu and his colleagues report their findings Monday (Sept. 3) in the journal Proceedings of the National Academy of Sciences. The researchers aren't yet sure whether being forced into a night-owl existence is bad for the tigers. They plan to research that question further, Liu said.