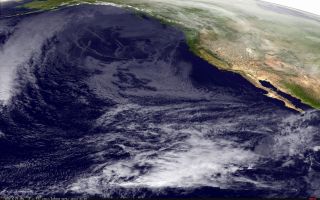 An image of the weather above the West Coast, taken by the NOAA GOES-15 satellite. Notice the lack of moisture over the Southwest, corresponding to cold, dry air.
(Image: © NOAA)

Known for hot temperatures, Southern California and the rest of the Southwest United States are undergoing a cold snap that has set records in many areas throughout the region.

Los Angeles set a record daily low of 34 degrees Fahrenheit (1 degree Celsius) this morning (Jan. 14), the coldest it's been in 22 years, according to the National Weather Service. Water pipes also froze and burst in Las Vegas, where the mercury dropped to nearly 17 F (minus 8 C), according to news reports.

So what's bringing all this chilly air to the area?

The low temperatures are due to an extremely cold, dry mass of air originating off the Arctic sea ice in the Canadian Arctic, said Jeff Weber, a scientist with the University Corporation for Atmospheric Research in Boulder, Colo. This mass of air has been pushed southward by a warmer, high-pressure system that moved north and east toward Alaska from the Pacific, Weber told OurAmazingPlanet. This helps explain why it's unseasonably warm in Alaska, while Angelenos are searching for sweaters. [The World's Weirdest Weather]

This flip-flopping of hot and cold is caused by a buckling of the jet stream, the current of air that normally ferries air in a relatively straight line from west to east across the United States and out into the Atlantic Ocean. However, due to higher-than-usual temperatures near Greenland, the stream is backed up. This heat and associated high pressure have slowed down the North Atlantic Oscillation, a climate pattern that pulls weather patterns eastward across the country.

This "buckling" has caused the jet stream to zigzag wildly, sending warm air from Hawaii to Alaska, and cold air from the Arctic all the way to northern Mexico, Weber said. While this isn't unheard of, the extent of the jet stream's "trough" is unusually deep, or far to the south, he said. This only happens about once every five to 10 years, he said.

Furthermore, there has been a localized low-pressure system on the California coast, which has allowed this cold, dry air to move from the Rocky Mountains toward the Pacific, said Stuart Seto, a weather specialist with the National Weather Service in Oxnard, Calif. This cold, dry air has displaced the moist air that usually blows onshore off the Pacific, giving Southern California and Los Angeles its famously balmy temperatures year-round.

This movement of air is similar to the phenomenon that causes the Santa Ana winds, which can blow out of the northeast into California at speeds of 40 mph (64 kph). The difference here is that this air is much colder and drier than the Santa Anas, and isn't producing winds nearly that fast, Weber said.

The dryness of the air is one important reason for the extreme cold; moist air can hold heat much more easily, Weber said. That explains why the desert is known for rapid temperature swings — hot days and cold nights — while coastal areas are noted for their moderate climates, with day and nighttime temperatures closer together, he said.

The cold air in the Southwest has been relatively stationary over the past few days. But the trough, with its cold temperatures, is gradually moving eastward, and record lows should be seen in the next two to five days in the Midwest, Weber said. Within a week, the frigid air should reach the Northeast, he said.

"It's been kind of a stagnant pattern, but we're going to share our cold air with the Midwest, and we're going to warm up," he said. By mid-week, temperatures are expected to return to seasonal averages for much of California and the Southwest, he added. "It's about time —and I 'm a guy who likes the cold," Weber said. Temperatures in Boulder have climbed above freezing only once since Dec. 24.

The pattern over Greenland that is causing the slowdown in the North Atlantic Oscillation also caused a similar blockage this past summer, leading to stagnant masses of hot air over the central United States, helping to cause the extreme heat that suffocated much of the nation during the season. It was also blocked during Hurricane Sandy, which helped steer the storm coastward, Weber said. In other words, the extreme cold is actually related to the same phenomenon that leads to extreme heat, and doesn't disprove global warming.

A buckled jet stream, and cold weather in the Southwest, happens just about every winter, although not usually to this extent, Weber said. However, more "extreme blocking," along with unusual heat waves and cold snaps, are more likely to be seen as a result of climate change, he said.

Editor's note: This article has been updated to correct the spelling of Stuart Seto's name.