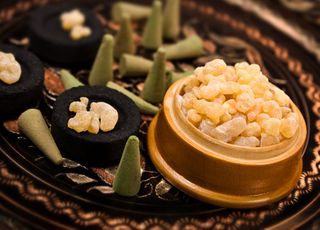 Frankincense consists of dried chunks of sap from trees in the Boswellia genus.
(Image: © Santje09 | shutterstock)

You've probably heard that Frankincense was one of the three gifts brought to the baby Jesus by the three wise men, according to The Gospel of Matthew. But what the heck is it?

Frankincense is the dried sap of trees in the Boswellia genus, particularly Boswellia sacra. These trees grow in Oman, Yemen and the Horn of Africa, including Somalia and Ethiopia. When dried, the sap is burned as incense and thought to have several medicinal properties. Frankincense producers wound the tree using a traditional chisel-like tool, after which a milky white sap leeches out of the hole, forming "tears." The first sap is not collected, and is thought to cleanse the wood of impurities, according to an Omani tour guide interviewed by the BBC. Once this dries, the hole is enlarged and deepened, after which sap comes out, dries, and is collected about two weeks later.

This tapping process is repeated several times at several points throughout the year, depending upon the region. After the stonelike gobs are gathered, they are put out to dry. The highest quality frankincense is silvery and clear, or with a slight green tinge. Brown-yellow frankincense is the most readily available and the cheapest type. In Oman, the best stuff is reserved for the sultan, Qaboos bin Said Al Said, and is hard to get outside the country, according to Slate.

The frankincense-producing lands in Oman are perhaps the best known and most ancient source of the material. It's been traded there for thousands of years, and shipped on boats to the Mediterranean, India and China. The Romans wanted to get into this trade, the BBC reported, sending 10,000 troops to the area in the first century B.C. to conquer and control the commodity's production. But the Romans never got there, driven back by the heat and aridity of the desert. Even today, it takes 11 hours to drive from Oman's capital of Muscat into the cooler, coastal hills in the country's south where B. sacra flourishes. [5 Surprising Facts About Christmas]

According to Businessweek, the frankincense trade became the most lucrative in the world from 1000 B.C. through A.D. 400. For a time, it made southern Arabia the richest place on Earth, Businessweek reports. Herodotus wrote of the frankincense produced in this region, but warned that the trees were guarded by flying serpents.

Frankincense has a lemony, musky odor. As Jackie Spinner put it in her Slate piece, "I asked a dozen Omanis to tell me straight-up if they liked the smell, which is both woodsy and fruity, and ancient, which can describe a lot of smells, including my grandmother snapping Juicy Fruit gum in front of a campfire. … Every Omani I pressed professed a great love for the smell." It is burned at Roman Catholic Masses and used in Arabic wedding and birth ceremonies. Asked why it was given to the baby Jesus, one Omani man told Spinner it was given "to ward off evil spirits and snakes." (One wonders about the tolerance of the serpents that allegedly haunted southern Oman's Boswellia groves.)

Frankincense was once much more valuable and sought after, partially due to its supposed health benefits. But modern studies have revived an interest in the material. Some studies suggest Frankincense may have anti-cancer and anti-inflammatory properties.

Unfortunately, Boswellia trees are in decline, due in part to over-tapping of trees to meet increased demand, as well as climate change. One study estimated the number of Boswellia trees could decline by 90 percent in the next 50 years. Another study, published recently in the journal Annals of Botany, hopes to correct that. It's the first time researchers have examined the tree's sap-secreting system, according to study authors, with results suggesting a maximum of nine tapping spots per tree. Due to high demand, up to 27 tapping spots are made per tree in some commercial sites in Ethiopia, according to the study.