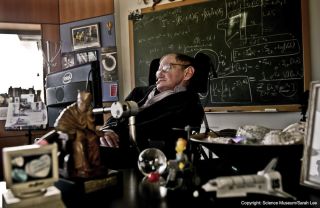 A photograph of Stephen Hawking in his office, surrounded by some of the memorabilia now on display at the Science Museum.
(Image: © Science Museum, London)

The foundation of a Russian billionaire announced Tuesday (Dec. 11) that it would hand out two $3-million physics prizes — one to legendary cosmologist Stephen Hawking and the other to group of CERN scientists who spearheaded this year's discovery of a Higgs-like particle at the world's largest atom smasher, the Large Hadron Collider (LHC), in Geneva.

Hawking is being honored for his work on black holes and his "deep contributions to quantum gravity and quantum aspects of the early universe," according to a statement. In particular, he was cited for theorizing what is now called "Hawking radiation," a faint glimmer of radiation emanating from black holes.

The prolific physicist said he was "delighted and honoured" to receive the prize, in an email to the Guardian.

"No one undertakes research in physics with the intention of winning a prize. It is the joy of discovering something no one knew before," Hawking wrote. "Nevertheless prizes like these play an important role in giving public recognition for achievement in physics. They increase the stature of physics and interest in it." [Stephen Hawking Biography]

Hawking added that he will use the money to help his daughter with her autistic son and "maybe buy a holiday home, not that I take many holidays because I enjoy my work in theoretical physics."

The other award is set to go to LHC particle physicists, who announced they'd finally found what looks to be the Higgs boson after decades of searches have turned up nothing. Scientists first predicted the existence of the Higgs boson, nicknamed the "God particle" by some in the popular media, in the 1960s to explain why other particles have mass.

That multimillion-dollar prize will be split between seven scientists involved in the discovery, including: Peter Jenni and Fabiola Gianotti of the LHC's ATLAS particle-detection experiment; Michel Della Negra, Tejinder Singh Virdee, Guido Tonelli and Joe Incandela of the CMS experiment; and LHC project leader Lyn Evans.

"Choosing this year's recipients from such a large pool of spectacular nominations was a very difficult task," Nima Arkani-Hamed, a theoretical physicist who was on the prize's selection committee, said in a statement. "The selected physicists have done transformative work spanning a wide range of areas in fundamental physics."

The award ceremony will take place on March 20, 2013, at the European Organization for Nuclear Research (CERN), which is home of the LHC.