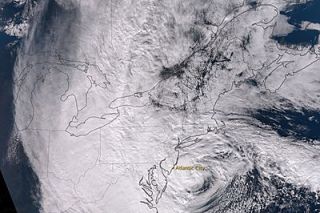 New York Gov. Andrew Cuomo drew a comparison between Hurricane Sandy and Hurricane Katrina on Monday (Nov. 26), claiming that the superstorm that hit the East Coast in late October was "more impactful" in many ways than the 2005 Gulf Coast disaster.

He said the comparison between the storms "puts this entire conversation, I believe, into focus," referring to his request for $42 billion in federal recovery funds for his state.

But putting Hurricane Sandy and Hurricane Katrina beside each other on a balance sheet would actually tend to blur the relevant facts, said Michael Lahr, an economist at Rutgers' Edward J. Bloustein School of Planning and Public Policy who has studied the economic impact of natural disasters.

"It's not a fair comparison. You have such tragic long-term losses [in the Gulf] that you will not have here," said Lahr. "Percentage-wise, New York has lost less. In two years, it will be back up and running and everything will be the same, if not better."

Lahr said the numbers are skewed by the fact that property in New York is generally far more valuable than in the Gulf. Sandy's damages to waterfront luxury homes and Manhattan's financial district are tallying alongside damages to the Gulf that, though less costly per square foot, caused more than 100,000 residents to make permanent moves to Texas.

Lahr was careful not to trivialize the damage wrought by Hurricane Sandy, which killed more than 100 people. But he said that numerical equivalences between the economic impact of Sandy and Katrina are hollow, in part because Sandy hit an area of the country that is singularly equipped to absorb and rebound from disaster.

"There will be more of a comeback because there is such value; the economy [in New York and New Jersey] is so much more resilient," Lahr told Life's Little Mysteries. "It's not like people aren't going to want to live in downtown Manhattan, and people are going to keep wanting to live on the Jersey Shore whether they should or not. The land is too desirable, while that's not necessarily the case in some of the poorer wards that were affected [by Katrina]."

Hurricane Katrina killed more than 1,800 people and its damages are estimated at $108 billion, making it the costliest natural disaster in U.S. history. Current estimates suggest the damage caused by Hurricane Sandy on the East Coast will cost upward of $65 billion, which would make it the second most expensive storm. [History of Destruction: 8 Great Hurricanes]

Lahr thinks that, following a hit to the gross domestic product in the fourth quarter of this year, nearly all of Sandy's cost will be reinjected into the economy in the next two years, contributing to what he says will be a needed boost to the construction industry in the region.

"People who deal with disasters assume a recovery period, they assume a response, and what happens in New York will fit with that," said Lahr. "[The area hit by] Katrina has not rebounded, it's still not what it was and never will be."