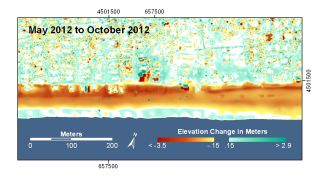 This USGS lidar image shows extensive erosion occurred at Ocean Bay Park on Fire Island, removing sand from the beach and dunes. There were many homes near the water, and the beach lost more than 10 feet (3.5 meters) of dune during Hurricane Sandy.
(Image: © U.S. Geological Survey)

New before-and-after airborne laser scans of demolished dunes in Long Island, N.Y., reveal the extent of the destruction caused there by Hurricane Sandy.

The images show that the storm dramatically reshaped Fire Island, a barrier island off the southern coast of Long Island. Within Fire Island National Seashore, the sea breached a narrow part of the island, creating a new inlet and cutting through 13-foot-high (4 meters) dunes. At Ocean Bay Park, where there were many homes near the water, the beach lost more than 10 feet (3.5 m) of dune during Hurricane Sandy.

At Ocean Bay Park, "You can see in the prestorm image a yellow line, that's the sand dune, and what's interesting is you can see houses that are sitting right on the sand dune," said Hilary Stockdon, a research oceanographer with the U.S. Geological Survey (USGS) in St. Petersburg, Fla. "And in the post-storm elevation image, that yellow strip representing the high dune elevation is gone. The dune was completely washed away," Stockdon told OurAmazingPlanet.

Fire Island is 31 miles (50 kilometers) long but range between only 520 and 1,300 feet (160 and 400 m) wide. The entire island was flooded during Hurricane Sandy and seawater breached the island in four places.

Erosion from the surging waters exposed a long-buried shipwreck in the Fire Island National Seashore.

The laser scans are preliminary images released by the USGS. In the days following Hurricane Sandy, USGS scientists flew over coastal areas from North Carolina to New York to monitor changes, Stockdon said.

The USGS scanned beaches and islands with lidar, or light detection and ranging, which bounces a stream of laser pulses off the ground. Airborne lidar equipment can measure surface elevation to within a few inches.

"It's very important to provide a picture of what the beach looks like now," Stockdon said. "Our models of how the beach was going to respond to Sandy were based on a time stamp of how those beaches looked in 2010. They had very fluffy, healthy dunes, and now those dunes are gone."

The USGS predicted extensive overwashing and breaching for Fire Island in advance of Hurricane Sandy, and New York ordered a mandatory evacuation for the island.

"Now those coastal communities are more vulnerable to future storms, and we can use these new elevations in our models to get a more accurate picture of how the beaches will respond to future storms," Stockdon said.